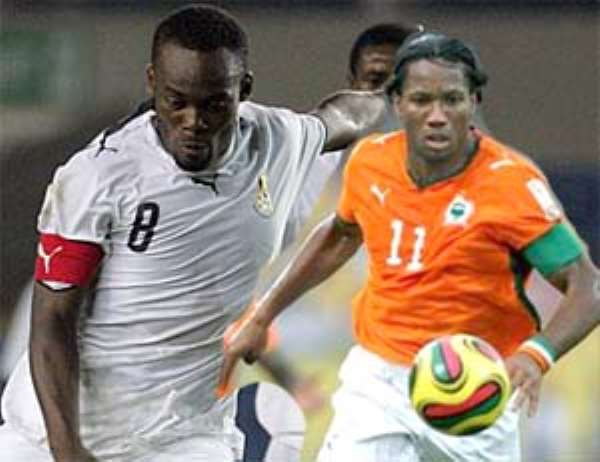 The Black Stars of Ghana will open their Group B account against tournament favourites Cote d'Ivoire today, in the ongoing Africa Cup of Nations in Angola.

The group, originally made up of four teams, has been reduced to three, with Burkina Faso as the other team. This follows Togo's withdrawal from the tournament after a fierce gun attack on its team.

The reduction in number has brought immense pressure on the teams, especially Cote d'Ivoire who were held to a goalless game in their first match against Burkina Faso. Any slip today would therefore prove fatal for the Elephants.

On paper, Cote d'Ivoire, led in attack by Chelsea hit-man Didier Drogba, seem to have a slight upper hand, but trust Ghana, who are anchored by Michael Essien also of Chelsea, to put up a strong resistance.

The last time the two power houses met, Ghana walloped the Ivorians 4-2 to pick the bronze medal of the 2008 Africa Cup of Nations played at the Baba Yara Sports Stadium in Kumasi.

Ghana, who are parading virtually a young squad following the absence of stars like Skipper Stephen Appiah and Sulley Muntari, have a tall order this time if they are to repeat the dose on their opponents.

Youngsters like Dede Ayew, Dominic Adiyiah and Emmanuel Agyeman Badu, all World Youth Championship winners who would be donning the national colours, are expected to rise to the occasion and prove their worth.

But the Ivorians, whose dream of a second Africa triumph would end with a slip against the four-time Africa champions, would enter the game full of determination and aim to maul the Black Stars.

This therefore makes the game a dicey one and already connoisseurs have labeled it 'final before the final'.

Certainly, the side that would take its chances on the day would amass the three valuable points at the end of the tie, which is expected to provide fireworks.