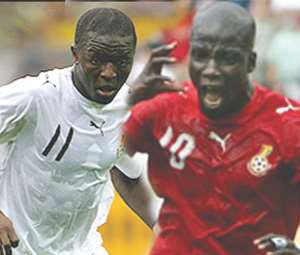 BLACK STARS coach, Milovan Rajevac has named a strong squad to face Zambia in a friendly in two weeks time.

Ghanasoccernet revealed yesterday that the Serbian has named the captain, Stephen Appiah, Sulley Muntari and Laryea Kingston to the squad that crushed Mali and Sudan in the World Cup qualifiers.

The trio missed the qualifiers in June for various reasons, but in their absence youngsters like Kwadwo Asamoah, Opoku Agyemang and Prince Tagoe have equally excelled.

The Black Stars secured massive away wins against Mali and Sudan, and the coach has further boosted the squad with the inclusion of these three key players to play against the Chipolopolo in London.

The game at Brisbane Road, home of Leyton Orient, is scheduled for August 12 and will see players like Richard Kingson, John Pantsil, John Mensah and in-form Matthew Amoah in action.

The 18-man squad also includes Haminu Draman and Eric Bekoe, who are both on stand-by.

The Black Stars are comfortably sitting on top of Group D in their World Cup qualifiers with a perfect record; a win against Zambia will further enhance their reputation as the toughest team on the continent so far this year.   Squad