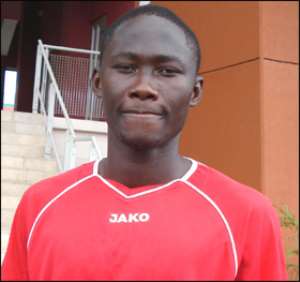 Eric Bekoe Ghanaian striker Eric Bekoe claims he wants to quit Egyptian side Petrojet after he was assaulted by Egypt football legend Hossam Hassan who now handles Telecom Egypt in the league.

Bekoe scored for Petrojet in a 2-2 with Telecom on Monday and is believed to have taunted the Ex-Pharaohs captain with his celebration.

The former Asante Kotoko forward was heckled and continuously hit in the tunnel at half-time.

After the match, there was a free-for-all brawl between the players of both teams in reaction to the half-time incidence.

The Egyptian Football Association has launched an investigation into the melee and if found guilty, Hassan could face a ban.

"He was saying I was sent to do something to him to get annoyed but in Ghana whenever we score goal, we do the sign of the cross and say hi to the fans and that was what I actually did," Bekoe told Ghanasoccernet.com.

"When it was half time and I was going to the dressing room I saw him standing but I wasn't having anything in mind.

"Before I realize he held my right ear and he was pulling and started kicking me around so the Policemen and others came to save me."