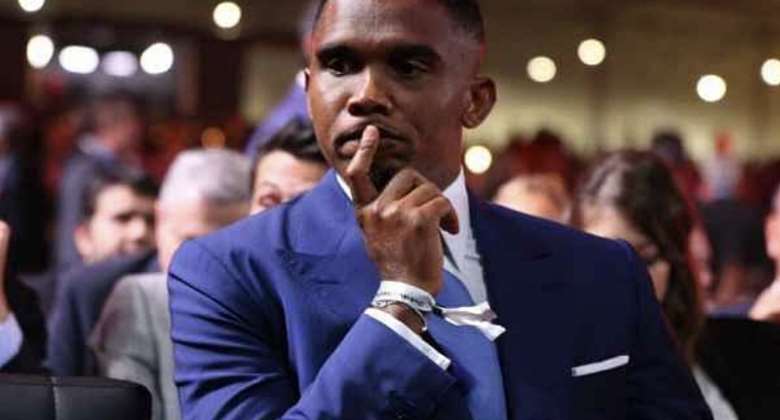 The footballing icon said he is sorry for involving himself in the unfortunate incident, adding that he was provoked by the man, whom he said is an Algerian.

The former UEFA Champions League winner claimed that the Algerian fan provoked him over a banter that has since been thriving after Algeria took on Cameroon on March 29 in a World Cup qualifier in Blida, Algeria where Cameron had a “controversial” victory after netting a 129th-minute shot victory.

Eto’o added in his apology note, shared on his social media handles on Tuesday, December 6, noted that the Algerians who made it to the tournament has been attacking Cameroonians over what they claimed to be a cheat.

Eto’o’s apology note reads as follows: “On last 5 December, after the Brazil-South Korea match, I had a violent altercation with a person who was probably an Algerian supporter.

“I would like to apologise for losing my temper and reacting in a way that does not match my personality. I apologise to the public for this unfortunate incident.

"I pledge to continue to resist the relentless provocation and daily harassment of some Algerian supporters.

“Indeed, since the Cameroon-Algeria match on 29 March in Blida, I have been the target of insults and allegations of cheating without any evidence.

“During this World Cup. Cameroonian fans have been harassed and pestered by Algerians on the same subject.

“I would like to mention that the scenario of Algeria's defeat was cruel but perfectly in line with the rules and ethics of our sport.

"All the appeals made by the Algerian Football Federation to the competent Jurisdictions have been rejected.

“I therefore call on the Algerian authorities and Federation to take their responsibilities to put an end to this unhealthy climate before a more serious tragedy occurs.

It concluded, “To Fennecs' fans, I wish that they find peace and manage to overcome the disappointment of a painful defeat, now behind us."

The forward who made his name for Chelsea, Inter Milan and Barcelona was captured in viral footage assaulting a certain cameraman at the outskirts of Stadium 974 in Doha, Qatar.

The video showed the time when the World Cup 2022 Legacy Ambassador was leaving the stadium just after he watched Brazil gambol to victory against South Korea in their round-of-16 match on Monday evening, December 5, 2022.

At first, Eto'o appears happy to pose for photos with waiting fans before a man (an Algerian Youtuber) with a video camera approaches him to his right.

The video, which has since been shared by many online platforms, suddenly captures the two (Eto’o and the cameraman) trading words at each other, though it is unclear what exactly happened.

Then after a while, the video shows a portion where Eto'o returns to the scene to confront the man and angrily pushes him onto the floor.

Unconfirmed reports indicate that FIFA is currently investigating the matter.

Election violence in Nigeria's south east is threatening to ...
52 minutes ago