World Cup 2022: Either Morocco or Senegal could break the glass ceiling 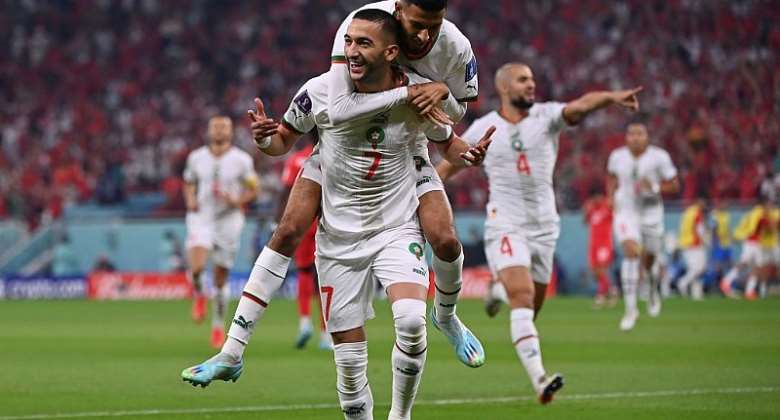 Sixteen remaining teams are playing in the knock-out phase of the 2022 men's football Fifa World Cup in Qatar, among them two African teams – Senegal and Morocco . The knock-out phase in Qatar reminds football fans globally of the unmistakable glass ceiling over Africa at football World Cups.

Despite spicing the tournaments with outstanding and iconic moments , African teams have always fallen short of Brazilian football great Pelé 's assertion that an African team would win the World Cup by 2000.

The determination of African teams in Qatar have roused fans across the continent. With Ghana, Cameroon and Tunisia eliminated, the hopes of Africa now rest on the shoulders of Morocco and Senegal. Their performances so far show that both teams have the potential to go all the way.

Morocco went into the World Cup as underdogs in Group F, which included European heavyweights Croatia and Belgium who, in 2018, were first and second runners-up. Heading to Qatar, Belgium ranked second in the world. The group also included Canada , who easily led the Confederation of North, Central America and Caribbean Association Football group in qualifying. In three rounds of play, Morocco drew with Croatia, beat Belgium 2-0 and edged out Canada 2-1 to win the group.

Going by the fan support in Qatar, Morocco finds itself in a unique position: it carries the dual hopes of both Africa and the Arab region. Morocco is the only Arabic speaking nation remaining in the first World Cup to be held in the Middle East . It's also the only African nation to win a group for the second time, its first time being in 1986. Even with that pressure, Morocco has the technical and tactical capacity to cope. The team has been steady, organised, serene, defensively sound, creative in midfield and smart in attack .

Morocco was the only team in the group to win twice, edging out Canada and upsetting Belgium 2-0, a result that led to riots in Brussels. Morocco has appeared in 1970, 1986, 1994, 1998 and 2018. It was the first African country to lead a group heading to the final 16 in 1986; and they were the first team to represent the continent after the boycott of the 1966 World Cup by African teams seeking direct representation at the World Cup. The current team should look to their 1986 squad for inspiration.

The 2022 team, coached by Walid Regragui , is counting on star players Achraf Hakimi and Hakim Ziyech , Romain Saïss and Yassine Bounou to steer them past a talented Spanish team in their first game of the knockout stage. Morocco has often been a trailblazer and the meeting with Spain presents an opportunity to break through to the quarter-final and possibly beyond.

For their part, reigning African Cup of Nations champions Senegal won their decisive group game against Ecuador 2-1 even without injured superstar Sadio Mané . They qualified for the final 16 as runner-up to Netherlands after beating hosts Qatar and losing to Netherlands. Their last group match was on the second anniversary of the death of the 2002 World Cup hero, Papa Bouba Diop. Ismaïla Sarr and captain Kalidou Koulibaly scored. They dedicated their progress to their idol Diop and their talisman Mané. The injury to Mané forced coach Aliou Cissé to reinvent his forward line. Koulibaly said the striker has been an inspiration for the team and acknowledged:

When it came to his injury, two thirds of the world probably doubted that we would be able to qualify.

Senegal's World Cup benchmark remains their historic 2002 debut, where they shocked the footballing world with a win over defending champions France. This led to a deep run to the quarter-finals, the second African team ever to reach the final eight. The Lions of Teranga must go past the talented England team to match this feat. The way the team coped with Netherlands may have given them confidence that they can overcome top European opposition in a one-match duel.

England are ranked 5th in the world and Senegal 18th. But, examples of higher-ranked teams (Belgium, Germany, Denmark, Uruguay, Mexico) bowing out early in Qatar is an indication that a team's ranking may not matter in the face of inspired, passionate application by a mentally strong underdog (Morocco, South Korea, Australia and Japan).

The Lions of Teranga have a solid side with good experience down its spine from the goalkeeper to the striking positions including Édouard Mendy , captain Koulibaly, Idrissa Gueye , Ismaïla Sarr and Boulaye Dia . The team, which bounced back from the initial loss to Netherlands, has shown they're endowed with many individual talents who have played together often. They're characterised by a strong team spirit and never-say-die attitude. However, they will need to play organised, inspired and disciplined football to emulate their 2002 heroes.

It has been a joy to see the fans of all the African teams in Qatar really showing up to support their national heroes. Despite bowing out, Tunisia, Cameroon and Ghana showed glimpses of positive tactical application, heroic technical displays and entertainment. The sensational wins by Tunisia over France, Cameroon over Brazil and Ghana over South Korea left the fans yearning for more. However, their mental lapses were costly and overall team performances require further refinement to instil consistence for the future.

Either Morocco or Senegal reaching the quarter-finals in 2022 would be a just reward to a continent that is full of anticipation but short on accomplishments in the tournament's history. The geographical representation from five confederations – Africa, Asia, South America, North America and Europe – in the final 16 shows that this World Cup could be ideal for a new champion to emerge.

Wycliffe W. Njororai Simiyu does not work for, consult, own shares in or receive funding from any company or organisation that would benefit from this article, and has disclosed no relevant affiliations beyond their academic appointment.

By Wycliffe W. Njororai Simiyu, Professor of Health and Kinesiology, University of Texas at Tyler