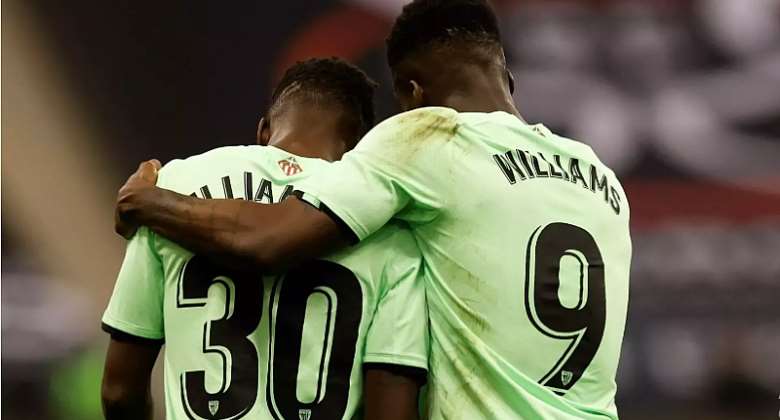 A year ago the Williams family would not have expected either of their sons to be at the FIFA World Cup.

Although a star player for Athletic Bilbao, and having recently broken a Spanish league record by playing 203 consecutive matches, Inaki had not featured in a Spain squad since 2016. Younger brother Nico, meanwhile, had just begun his professional career and boasted only a handful of appearances for the same club.

Now the two brothers are both set to head off to Qatar this month for the world’s greatest tournament. However, for once in their lives, they will not be going together.

Inaki will be representing Ghana after finally accepting their offer to switch nationalities from the country of his birth to that of his parents. He made his debut for the Black Stars in September against Nicaragua and also played against Brazil.

Nico is preparing to go to Qatar with Spain, having his earned his first call-up in September in the UEFA Nations League. He made his debut against Switzerland and in his second appearance off the bench against Portugal he seized the moment by setting up Alvaro Morata’s winning goal, sending Luis Enrique’s side to the Final Four.

The Williams brothers have been on a touching journey together in football, both joining Athletic’s academy before breaking into the first team. But the story of their family is even more remarkable.

In search of a better life before either of their sons were born, mother Maria and father Felix made the treacherous 4,000-kilometre journey from Ghana to the Spanish enclave of Melilla.

They did some of the journey in the back of a crowded truck, the rest of it by foot, crossing the sands of the Sahara desert in temperatures of 40 and 50 degrees Celsius. Felix still has trouble walking due to the damage he did to the soles of his feet.

Maria, meanwhile, was pregnant. They were arrested upon arriving in Melilla but were granted political asylum and travelled to Bilbao, where Inaki was born, named after a priest who had helped the family and who later became the boy's Godfather.

“Hearing my parents’ story makes you want to fight even harder to give back everything they sacrificed for us,” Inaki told The Guardian.

“I couldn’t ever repay them – they risked their lives – but the life I try to give them is the one they dreamed of giving us."

The family eventually settled in the nearby city of Pamplona and eight years later Nico was born. With Felix forced to spend much of his time working abroad, Inaki had to shoulder a lot of the parenting responsibilities like taking his younger brother to school or football practice and preparing his lunch. In many ways he acted as much of a father to Nico as a brother.

In 2013 Inaki signed for Athletic and Nico, then aged 11, followed him and joined the club's youth set-up.

Inaki’s full debut came in 2014 and that season he helped Athletic reach the Copa del Rey final. He has won the Spanish Supercopa twice, and even scored the winning goal in the final against Barcelona in 2021.

Later that year the family’s dream was realised when Nico made his Athletic debut, coming off the bench against Real Valladolid. Ten minutes later Inaki also came off the bench to join him on the pitch.

The following campaign Nico steadily consolidated his place in the first team and scored his first goals in the Copa del Rey and, like his brother the year before, in the Supercopa. When he scored the winning goal in the semi-final, mother Maria celebrated by jumping into a swimming pool fully clothed.

"I feel proud of both of them,” she told Marca. “It’s so difficult to make it as a footballer. Out of 100 people only five make it. So imagine having two brothers together in the same team." This season the brothers have truly been inseparable, playing all 12 league matches for Athletic, with Nico on the right wing and Inaki as centre-forward.

They each scored in a memorable 3-2 win over Rayo Vallecano in September, which witnessed Nico’s first league goal and his first in front of the Athletic fans at San Mames. Inaki, naturally, was the first person to celebrate with him, running across the pitch to jump into his arms.

“We’re proud of being together," Inaki said after the game. "Our mum will be pleased with her boys.”

In their next home game against Almeria, the script got even better: Nico set up Inaki to score the first goal before Inaki repaid the favour, passing the ball to his brother to score the third.

Between them the pair have eight goals and four assists and have propelled Athletic to their best start to a season in nine years.

Now they are on their way to the World Cup, albeit with different teams, in the form of their lives. There is even the chance their paths could cross in Qatar in the quarter-finals.

It is safe to say that their parents will be watching every minute.