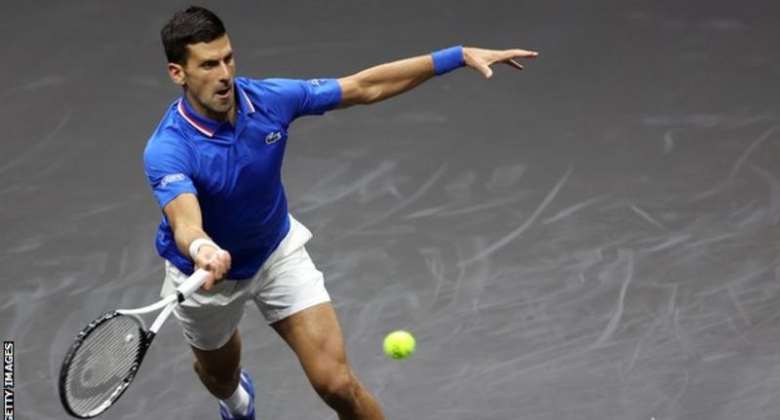 Novak Djokovic won the 21st major singles title of his career at Wimbledon, but was unable to play at the US Open

Novak Djokovic looked sharp as he thrashed US Open semi-finalist Frances Tiafoe at the Laver Cup in his first appearance since winning Wimbledon.

Serbia's Djokovic won the first set in 23 minutes before completing a 6-1 6-3 victory to put Europe ahead in London.

The former world number one also won in the doubles to put Europe into a 8-4 lead going into Sunday's final day.

Roger Federer, whose career came to an end in the early hours of Saturday, was on the bench to support Djokovic.

"It was a long and emotional day yesterday, it was hard to restart the engine," Djokovic said about Federer's farewell.

"It was one of the most beautiful moments we have experienced live or on the tennis courts. We were all taken away by it."

That left the teams tied at 4-4 at the halfway stage of the three-day event before the impressive Djokovic put his team in command.

After cruising past Tiafoe, the 21-time major singles champion teamed up with Berrettini to win 7-5 6-2 against Team World pair Jack Sock and Alex de Minaur.

Djokovic, 35, had not played competitively since winning Wimbledon in July, having been prevented from playing in the United States because he is not vaccinated against Covid-19.

"I haven't played for two months and I'm really glad to have continued the run, it was a pretty decent match from my side. I'm seeing the ball well and didn't do many things wrong," he said.

Each match win is worth three points on Sunday, with the first team to earn 13 points declared the winners.

Federer is still part of the Europe team in London, supporting and coaching his team-mates

Federer was coaching Berrettini during the Italian's match, which the world number 15 described as surreal because the Swiss great had inspired him to become a professional tennis player.

"It's actually weird, because when you're on court you're not thinking, 'oh my God, Roger is coaching me'," said 26-year-old Berrettini.

"But then when you finish the match, you're like, 'wait, what?' Last night, for example, one of the reasons why I couldn't sleep is because Roger had been crying on my shoulder [during his farewell match]."

Federer was only fit enough to play in the doubles because of a knee injury, taking to the court alongside Rafael Nadal as he waved goodbye to his 25-year professional career.

Nadal, whose wife is expecting their first child, only went to London to play in the farewell and has now returned to Spain.

Players from each side are usually required to play at least one singles match in the annual three-day event.

But Federer and Nadal were given special dispensation and, after losing to American pair Sock and Tiafoe, were replaced by alternates Berrettini and Norrie.