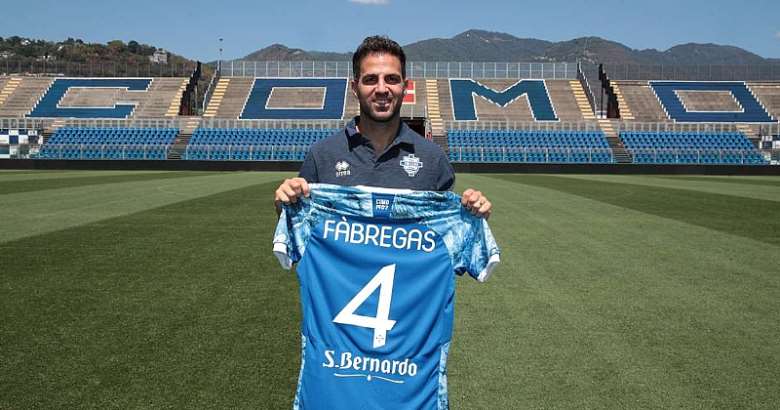 Cesc Fabregas has joined Como on a free transfer where he will also be a part-owner, the Serie B club have announced.

The 35-year-old has signed a two-year deal with the Lombardy club and is also a shareholder.

"That's what Cesc wants to get involved in. He'll be here a lot longer than expected really. It was important, he felt that way, to be part of it going forward long-term. He could see what we're trying to achieve at this football club.

"There's a lot more to be done at the football club regarding where we want to end up, in Serie A. He sees it as a good opportunity and I'm pleased he's on board."

Fabregas says he is not looking to simply wind down his playing career at Como and that he has been struck by "football people with a serious vision who know what they are doing".

"I invest in the club properly and this is the biggest way for me to show how ambitious we are as a club," the former Spain international said.

"But also as a club to just keep growing for the years to come and see where we can get. Definitely, the club is in good hands. That's what brought me here really, the ambition to keep doing well and to see something always across the line."

The first steps in Fabregas' illustrious football career were taken at Barcelona's La Masia where he moved through the youth ranks in the same age group as Lionel Messi and Gerard Pique.

After leaving for Arsenal, he made his debut in October 2003, in a League Cup tie at home to Rotherham. In the process, he became Arsenal's youngest-ever player.

After becoming club captain and winning both Euro 2008 and the 2010 World Cup with Spain, Fabregas returned to Barcelona.

Fabregas was supposed to be the final piece of the puzzle for Pep Guardiola's Barcelona but never quite hit the heights he was expected to. During the post-Pep transition, Fabregas was sold to Chelsea.

Upon returning to the Premier League, Fabregas starred as the Blues won the league title twice in three years. After that though, he played sparingly and moved on to Monaco.