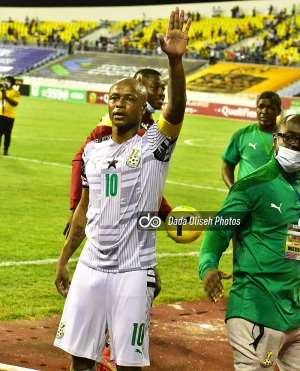 Black Stars captain Andre Ayew has been named in Black Stars' squad for the 2022 World Cup playoff games against Nigeria despite not being eligible to feature.

Andre Ayew is no doubt seen as a source of inspiration to the team and without him featuring against the Super Eagles, the fU-20 World Cup winner could inspire the Black Stars to victory over Nigeria.

The Al Sadd forward was disqualified from the game after bagging a red card in Ghana’s last group game against Comoros in the 2021 Africa Cup of Nations.

The first leg of the match is scheduled for March 25, 2022, with the second leg four days later.

The Black Stars squad for the games is yet to be released with news circling that Ghana wants to keep it as a ‘surprise package’.

Ghana having failed to qualify for the 2018 Mundial in Russia are aiming to book a place in the 2022 global showpiece in Qatar later this year.