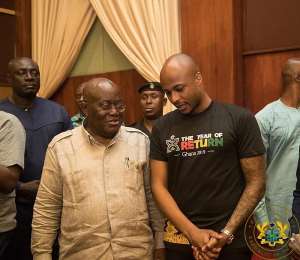 Uncle of Andre Ayew, Solar Ayew, has said nobody can strip off the Black Stars captaincy from the former Olympique Marseille forward with the exception of President Akufo Addo.

Solar's comment comes after Andre's leadership qualities was questioned after the Black Stars got eliminated from the 2021 Africa Cup of Nations [AFCON] with many Ghanaians calling for his exclusion from the team.

The Black Stars won no game in the three matches honoured, having earned just a point to finish at the bottom of Group C with just a point.

Andre, who was named as the Black Stars captain ahead of the 2019 AFCON in Egypt featured in all three games and scored against Comoros in their final group game but was sent off on the 24th minute.

Despite the criticisms, Solar says Andre will continue to remain the country's skipper and no one can snatch it from him except the President.

"It’s a pride and honour to captain your national team, and per the performance and leadership qualities of Dede [Andre] Ayew, it will take only the President of the land, His Excellency Nana Addo Dankwah to stripe off the captaincy from Dede Ayew," he told Kumasi based Light FM.

"His absence will make it difficult for Ghana to beat Nigeria," he added.

The Black Stars will face Nigeria in a two-legged game in March this year in the playoff round of the 2022 FIFA World Cup qualifiers in March later this year.

Prepare for hunger in Ghana — GAWU warn Ghanaians
20 minutes ago