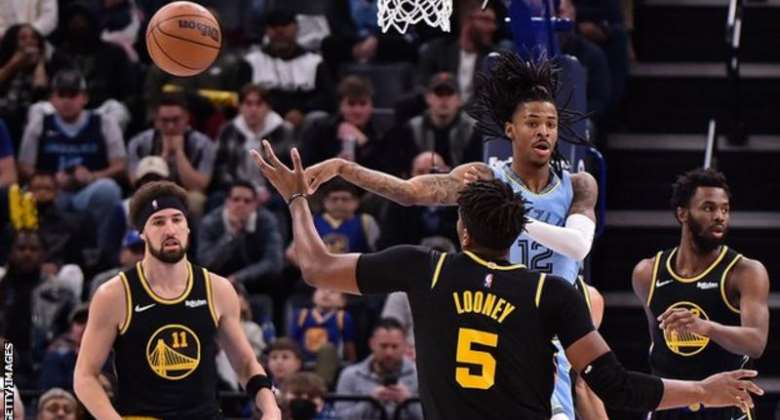 Ja Morant scored 29 points to lead the Memphis Grizzlies to their 10th consecutive win with a 116-108 victory over the Golden State Warriors.

The Grizzlies trailed by three points entering the final quarter but took control late on to extend their franchise record for most wins in a row.

Memphis are now fourth in the Western Conference, with the Warriors second.

"I was aggressive, I got going very early," said Morant.

"I made them change their scheme up. If you blitz me I feel like I have a lot of guys who can score the basketball."

Ziaire Williams and Tyus Jones had 17 points for the Grizzlies, while Brandon Clarke scored 14.

Warriors star Stephen Curry made 27 points, 10 rebounds and 10 assists - his second triple-double of the season - and Klay Thompson hit 14 points in his second game back after a 31-month injury absence.

The Phoenix Suns moved one game clear of the Warriors at the top of the Western Conference with a 99-95 win over the Toronto Raptors.

Suns guard Devin Booker put his side ahead with a minute remaining and hit two crucial late free throws as he scored 16 points overall.

Phoenix now have a NBA-best record of 31 wins and nine defeats.

Eastern Conference leaders the Chicago Bulls comfortably beat the Detroit Pistons 133-87 for their 10th win in their last 11 games.

The Los Angeles Clippers, who scored just 28 points in the first half, came from 25 points down in the third quarter to beat the Denver Nuggets 87-85.

The Washington Wizards beat the Oklahoma City Thunder 122-118 and the New Orleans Pelicans secured a 128-125 win over the Minnesota Timberwolves.

Latest Photo Reports
Catch up with all the political quotes from our politicians.
Advertise here
More from Basketball
ModernGhana Links
I want to use basketball to unite South Sudan, says LA Lakers' Wenyen Gabriel
Celtics great Bill Russell, 11-time NBA champion, dead at 88
There must be focus on the grassroots to grow basketball in Ghana - APO Group chairman advises
TOP STORIES