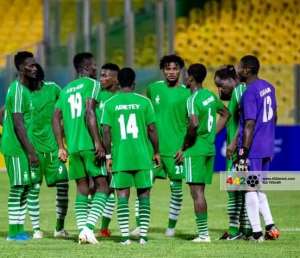 The Central Region-based club has had a slow start to the new league campaign where they only managed a draw and two defeats from the first three matches.

In a Matchday 4 encounter against newcomers Bibiani Gold Stars today, Elmina Sharks have made their superiority count in order to cruise to victory.

On the matchday, the home team took the lead through Enoch Agblenyo in the 32nd minute on the back of a good team play.

Although Sharks will hold on to end the first half in the lead, Gold Stars equalized to draw level just a minute into the second half.

In the remainder of the match, players of Elmina Sharks had to fight but fortunately succeeded in netting the crucial winning goal in the 79th minute when Alhaji Mustapha scored with a fine effort.

Courtesy of the win, Elmina Sharks have climbed out of the relegation zone and now 10th on the league table.