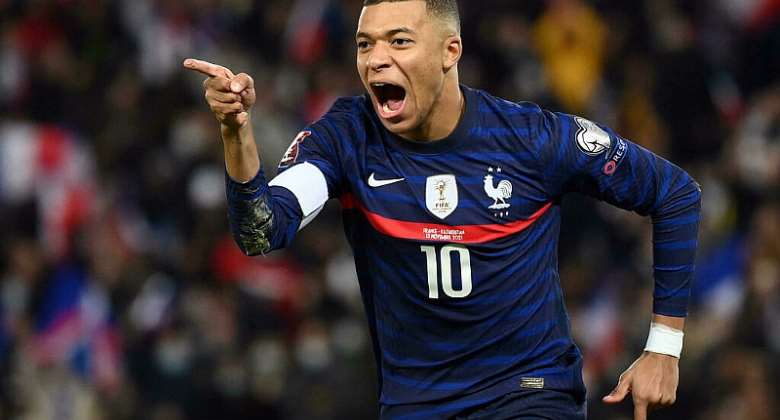 Kylian Mbappé scored four goals and Karim Benzema bagged a brace as France thrashed Kazakhstan 8-0 to advance to the 2022 World Cup in Qatar as winners of European qualifying Group D.

Mbappé started the party at the Parc des Princes in the sixth minute and added the second six minutes later. He completed his first hat trick for his country in the 32nd minute.

In the second half, the 22-year-old Paris Saint-Germain striker turned provider for Karim Benzema to notch up his second goal of the night and move past David Trezeguet into fourth place on the all-time scoring list with 35 strikes.

Adrien Rabiot made it  6-0. The Juventus midfielder headed home Antoine Griezmann's corner in the 75th minute to chalk up his first international goal on his 23rd appearance.

Griezmann added his name to the scoresheet from the penalty spot seven minutes from time to move up to third in the national rankings with his 42 goal.

Mbappé added his fourth of the night and France's eighth against a side ranked more than 120 places beneath France in the rankings.

Proof
“We knew that Kazakhstan were weaker than us … but we had to show it.”  Benzema told French TV channel M6.

“And we did. I'm really pleased to have played in a victory which led to qualification for the World Cup.”

France boss Didier Deschamps added: “The aim was to qualify … and we've done that. And there was also the manner of qualifying … everyone had a part in the festival.”

Qatar 2022 will be the seventh consecutive World Cup tournament for the France side and their 16th participation overall in the competition.

Challenge
They will attempt to become only the third country after Italy and Brazil to successfully defend their crown.

Mbappé, who was deemed man-of-the-match said: “Not everyone gets the chance to go and play in the World Cup. France will be there and we're going there to win it.”

Elsewhere, Belgium, the world's top ranked team, progressed to next year's tournament as winners of Group E following a 3-1 victory over Estonia at the Koning Boudewijnstadion in Brussels.

Christian Benteke, standing in for the injured Romelu Lukaku, scored the opener and set up Yannick Carrasco for the second before Erik Sorga pulled one back for the visitors.