Profile of Hockey Players of 2002 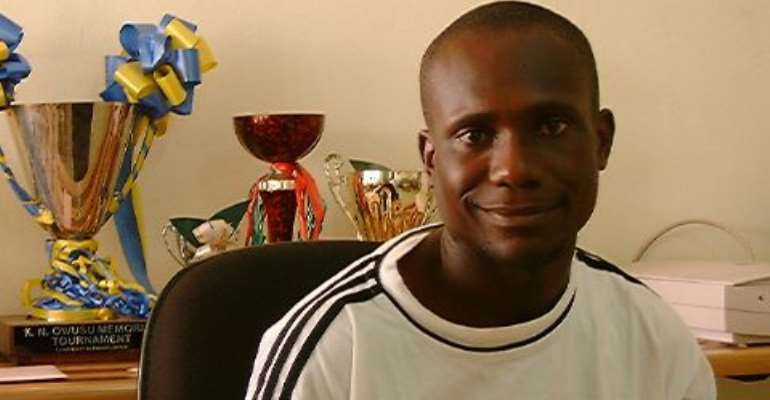 1. Male Category: Name: Patrick Taylor (Amore) Patrick was born 23 years ago and hails from the historic city of Cape Coast. In hockey circles he is known simply as Amore (pronounced Amoe by his colleagues), a name he said was given to him at birth by his sailor uncle. Patrick commenced his hockey career in 1989 at a tender age of 10 years on the green turf of the University of Cape Coast hockey pitch under the tutelage of a university lecturer named Mr. Awunyo Akabah. He attended Mfantsipim School in Cape Coast where he was a winner of 4 consecutive Central Regional Schools and Colleges Championships. In July 1994, he led his young colleagues to Accra to win the Ghana Hockey Association (GHA) instituted Kofi Yeboa Memorial Tournament under the supervision of coach Adu Manukure. In December of the same year, he featured for the Cape Coast Nostronomous hockey club that won silver in the GHA organized national club championships. He was invited to join the national under-23 team that was scheduled to take part in the African under-23 championship. The team did not however embark on the trip. In 1995, he was a bronze medal winner with Nostronomous during the national club championship. He was recruited to join the CEPS hockey club by coach Boakye-Yiadom and in 1996 and 1997, he was a member of CEPS club that won two successive Toyota League Championship. He was recruited to join the Ghana Navy in 1999 and won gold during the Armed Forces Games the same year. He made a re-entry into the competitive Greater Accra Hockey Association league with Naval Club, Marine Sticks. In their first year of competition, Patrick won Bronze in the Pepsi Hockey League. In 2002, he again won bronze with Marine Sticks after his club faltered during the latter part of the championship when they were in contention for the ultimate prize. The memorable occasion for Patrick was when he led Mfantsipim School to break the dominance of Achimota School in an annual triangular competition in 1994. His favorite player on the domestic scene is Richard Abaidoo while Jay Stacy of Australia is his favorite foreign player. His favorite role during play is in the midfield. Richard Akpokavie offers him a lot of inspiration and his ambition is to play professional hockey abroad. Patrick was second top-scorer in the 2002 Pepsi Hockey league with 19 goals, a fete that could at best be described as rare for a midfielder. His work rate in midfield is phenomenal just as his ball control and distribution is admirable. Patrick has a remarkable disciplinary record and has been the fulcrum around which the Marine Sticks club revolved. He has enjoyed a splendid year and is member of the National team currently preparing for the All Africa Games slated for Abuja, Nigeria in October 2003. 2. Female Category Name: Amponsaa Asumeng-Addo (Abena) Abena, as she is usually called by her peers, was born on 18th April 1967 in Akim Tafo in the Eastern Region of Ghana. She commenced her hockey career at the Welhema Bishop Memorial Secondary School in Akim Tafo in 1987. She was however not very active during her school days. Her interest in the game was her main motivation for making her debut and that indeed has kept her glued to it. She was recruited into the Ghana Prison Service shortly after school in 1989, an occasion she values as the most memorable in her life. She has been a pillar in defense for the Reformers club and has won 1 Security Services Games (SESSA) Games gold in 1990. Abena has won a total of 3 League championships, 6 knockout championships, 5 Super Champions titles and 3 Gala championships. Abena has been a regular player in the National women’s team since 1995 when Ghana participated in the All-African Games in Zimbabwe. She also played for the national team against Nigeria in an international friendly in Accra in 1998. Abena has been capped 5 times and is looking forward to further opportunities to feature for the national team. The year 2002 was special for Abena, she was called up for national duties with the national team preparing for the All-African Games scheduled for Abuja, Nigeria in October. Her club Reformers also represented Ghana in the Africa Cup for Club Champion in Accra and won the bronze medal. On the domestic front, Abena has been outstanding in all aspects of the game. She has been solid in the defense line of Reformers, her favourite role during play. Abena has indeed been the barrier most attackers have not been able to go past, which accounts for the success of her club. Her disciplinary record has been impeccable in the year 2002 as it has been always and she has carried herself well on and off the field of play. She led her club to sweep all honours as was the case last year. She won the Atlantic Port Services Gala competition, the Pepsi Hockey league, Mobitel Knockout competition and in the process retained the champion of champions trophy. While drawing a lot of inspiration from her senior team mate Christie Dennis, Abena is looking forward to a wonderful year during 2003 when she aspires to win gold with the National team during the All-African in Abuja. She is also looking forward to retaining all the trophies she won with her club during the year 2002. Her favourite hockey player is national team-mate Rosemary ‘Nanaa’ Lamptey of CEPS