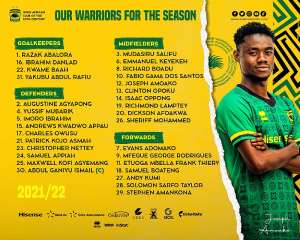 The Kumasi-based club last season fought to win laurels but failed in the final weeks to the climax of the campaign as rivals Hearts of Oak run away with both the league and MTN FA Cup.

Pained by the inability to win trophies last season, Asante Kotoko have prepared adequately in the off-season and is now eager to make amends at the end of the upcoming campaign.

As a result, not only has the club appointed a new head coach in Dr. Prosper Narteh Ogum but it has also signed as many as 14 new players.

Today, the head coach has finalised his 31-man squad that will be fighting for titles in the new football season.

The squad has five players below the age of 19 blended with a number of experienced players as well.