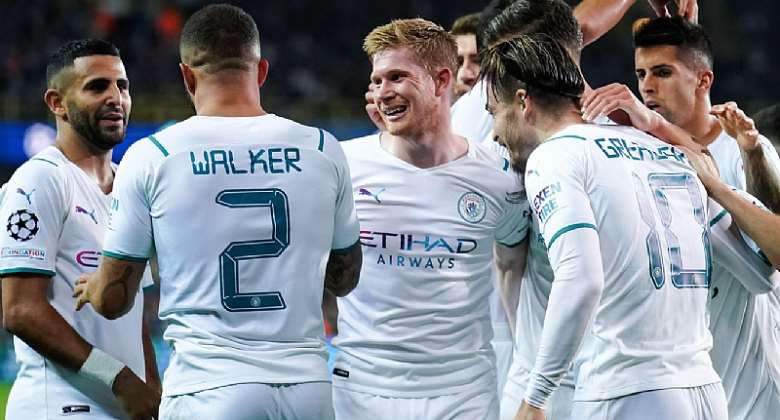 Riyad Mahrez scored twice as Manchester City delivered "one of their best" Champions League performances to thrash Club Brugge 5-1 on Tuesday and re-emphasise their status as major contenders for a first European crown.

Joao Cancelo gave City a deserved lead on the half-hour and Mahrez converted a penalty just before the break as Pep Guardiola's side bounced back in style from last month's loss to Paris Saint-Germain.

Kyle Walker added a third early in the second half and 19-year-old Cole Palmer bagged his first Champions League goal minutes after coming on as a substitute.

Hans Vanaken pulled a goal back to the delight of the home supporters but Mahrez capped a thumping City victory with his second of the night.

"It was one of the best performances in Europe we've done so far," said Guardiola. "We are all delighted. We were so good."

The win leaves City side with six points after three games in Group A, with the champions of England and Belgium to meet again in two weeks in Manchester.

"If we can take three more points, to have nine points with two games left, we'll be close to qualifying for the next round," added Guardiola.

Viewed as the weakest team in a group also featuring 2020 semi-finalists RB Leipzig, Brugge had surprisingly held PSG to a 1-1 draw in their opening game of the section at the Jan Breydelstadion.

City, facing Brugge for the first time, twice had the ball in the net inside the opening 15 minutes. Grealish's lob was ruled out for a push on Clinton Mata, with Rodri's tap-in disallowed for offside.