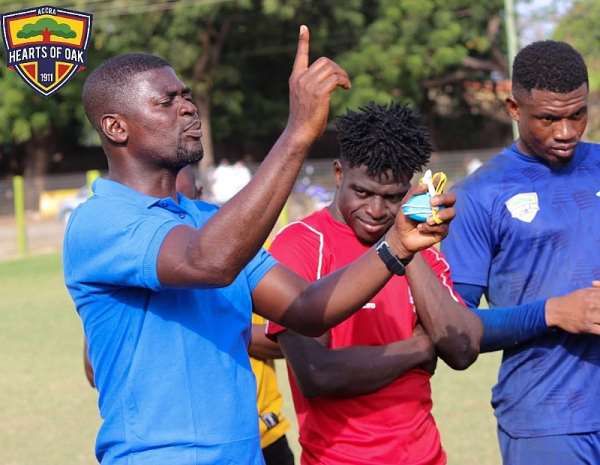 Hearts of Oak on Tuesday, July 27, 2021, returned to training to prepare for the semi-final clash against Medeama SC in the MTN FA Cup.

Nicknamed the Phobians, the capital-based club over the past weekend survived a strong test from Elmina Sharks in the quarter-finals of the domestic cup competition.

In a game where both teams failed to score in 90 minutes, a spectacular free-kick goal scored by defender Caleb Amankwah in extra time powered Hearts of Oak to triumph over the Sharks.

Having allowed players to rest on Monday, coach Samuel Boadu resumed training with his players today to begin preparations for the upcoming clash.

Hearts of Oak are hoping to knock out the team from Tarkwa to make the finals of the MTN FA Cup as the team bids to win double this season.

Earlier this month, the Rainbow Club was crowned Champions of the 2020/2021 Ghana Premier League.

Courtesy of that success, the team will represent Ghana in the CAF Champions League next season.

Find below some pictures from Hearts of Oak’s training today: