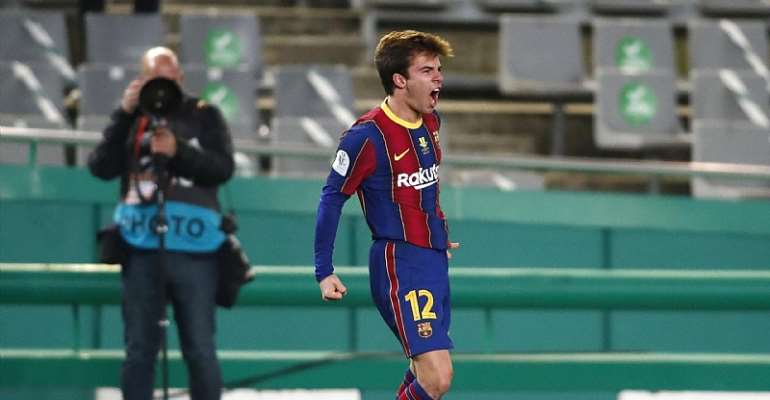 Ricard Puig of Barcelona celebrates after scoring the fifth and wining penalty in the shootout during the Supercopa de Espana Semi Final match between Real Sociedad and FC Barcelona at Estadio Nuevo ArcangelImage credit: Getty Images

Barcelona set up a Spanish Supercopa final against either Athletic Club or Real Madrid with a penalty shootout win over Real Sociedad in a semi-final tie that went the distance.

Lionel Messi was rested by Ronald Koeman for the match, with Martin Braithwaite selected in the Argentine’s place. Real Sociedad were also missing David Silva after picking up a minor muscle injury.

Despite the absence of Messi, Barca took the lead after 39 minutes when Antoine Griezmann clipped a cross into the six-yard box for Frenkie de Jong to power home a header, lifting the Dutchman’s tally to three goals and two assists in his last nine appearances.

La Real, however, restored parity just six minutes into the second half, with Mikel Oyarzabal converting from 12 yards out after the Basque side were awarded a penalty kick for a handball by de Jong.

Marc-Andre ter Stegen made a number of important saves to prevent Real Sociedad from taking the lead in extra time, with substitute Adnan Januzaj denied a stunning solo goal and a freekick that struck the post in the final few minutes.

Ter Stegen was the hero for Barca in the shootout as the German saved two penalties with Riqui Puig scoring the spot kick that sends his side to Sevilla for Sunday’s Spanish Supercopa final.