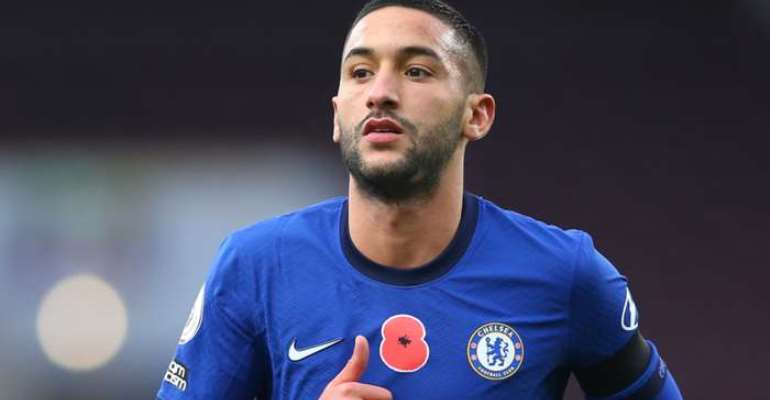 The Morocco international was part of the Blues side that battled to a 0-0 draw with Tottenham in the Premier League on Sunday, with Jose Mourinho's side going top of the division after the result.

Prior to the Spurs match, Chelsea boss Frank Lampard said he didn't want to place the burden of replacing Hazard, who scored 110 goals in 352 games for the club before being sold to Real Madrid in 2019, on any of his attacking players.

However, Ziyech says he is an admirer of Hazard's abilities and admitted he studies the Belgian's game to help improve his own.

"Eden is a world-class player," Ziyech said.
"You always take inspiration from that, how he plays the game. You always look at the small things, how he does stuff - and I can learn a lot from him."

Despite failing to secure all three points against Tottenham, Chelsea remain only two points behind their London rivals on the Premier League table after 10 matches.

Ziyech believes Lampard's Chelsea side are capable of competing for title if they want to work hard enough for it.

"Of course we can make a challenge," Ziyech said.
"You always have to believe in it. It starts from believing in it and then working every day harder. At the need of the day we will see what it brings.

"But you have to believe it is possible and that is what we are doing. We believe it.”

Chelsea enjoyed the majority of possession with 60 per-cent against Spurs and also had 13 shots to five in the stalemate at Stamford Bridge.

Ziyech says he feels like only an individual mistake would break the deadlock and the Blues were disappointed to not pick up all three points at home.

"It felt like whoever was going to make the mistake would lose the game," he said.

"It was not really a game to play football. It was a tactical game. For their attackers and ours there was no space to play. We had much more of the ball than they had, but it was difficult to find space and create chances.

"Our feelings were mixed. A little disappointed because we were at home and we want to win the game but on the other side you have to look to yourself and say you didn’t create enough.”