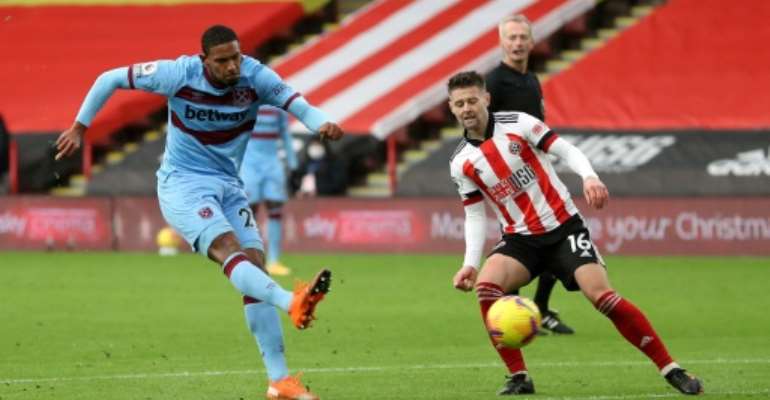 Sebastien Haller (left) produced a 'fabulous finish' to give West Ham a 1-0 win over Sheffield United. By Catherine Ivill (POOL/AFP)

New Ivory Coast international Sebastien Haller scored his first goal from outside the penalty area in almost 200 Dutch, German and English league matches to give West Ham a 1-0 victory at Sheffield United.

Sheffield manager Chris Wilder hailed the 56th-minute strike a "fabulous finish" from the 26-year-old Hammer, who was born in France but qualifies for the Ivory Coast under the FIFA parentage rule.

While Haller celebrated, another Ivory Coast forward, Nicolas Pepe, was sent off for a headbutt, leaving 10-man Arsenal to force a 0-0 draw at Leeds United.

Here, AFP Sport rounds up the performances of African stars in the major European leagues at the weekend.

Haller made the most of his chance to start for the Hammers in the absence of Michail Antonio with a stunning strike into the top corner from outside the area to earn a win at Sheffield United. The Ivorian's first away league goal since December moved David Moyes's men up to eighth.

Pepe's red card for a needless headbutt on Ezgjan Alioski was branded "unacceptable" by furious Arsenal boss Mikel Arteta as the 10-man Gunners escaped with a draw at Leeds. Pepe has failed to live up to his £72 million ($96 mn) price tag over the past two seasons and wasted a rare Premier League start by nudging his head into that of Alioski six minutes into the second half.

Ivory Coast midfielder Boga scored his first league goal this season, curling in the opener three minutes before the break in a 2-0 win at Hellas Verona. Sassuolo are unbeaten this campaign and lie second, two points behind leaders AC Milan after eight games.

Towering defender Koulibaly lost the battle with AC Milan star Zlatan Ibrahimovic, who scored twice in a 3-1 defeat which saw Napoli drop from third to sixth in Serie A. The Senegalese took an elbow from the Swedish veteran in the process. "On TV it looks like a Mike Tyson elbow, if you see the grimace," complained Napoli coach Gennaro Gattuso.

The Morocco international put his side ahead on the stroke of half-time as Frankfurt held title hopefuls RB Leipzig to a 1-1 draw. Barkok picked up a long ball from Evan Ndicka before darting between two Leipzig defenders and firing the ball past Peter Gulacsi to score only his third Bundesliga goal.

The Democratic Republic of Congo forward put his side 2-1 up in the first half in a dramatic 3-3 draw with local rivals Hoffenheim. Having smashed his first effort against the post, Wamangituka stabbed home the rebound to score his third goal of the season and extend Stuttgart's unbeaten run to seven games.

The Nigerian striker Awoniyi and Tunisian international Shkiri both scored in Union Berlin's 2-1 win over Cologne. Awoniyi scored the opener, holding off two defenders to prod the ball past Timo Horn midway through the first half. It was his first goal for Union since joining them on loan from Liverpool last summer. Shkiri put Cologne level later in the first half. After Marcus Ingvartsen brought down Marius Wolf on the right wing, Ondrej Duda sent a curling free-kick into the box and Shkiri nodded home from close range. 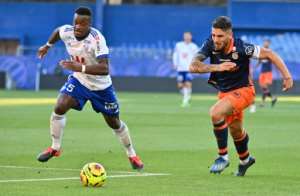 The Algeria international scored a pair of headers in Montpellier's thrilling 4-3 win over Strasbourg, upping his tally for the campaign to six goals. France-born Delort had also netted in the 2-2 draw in Zimbabwe last week that sealed title-holders Algeria's place at the 2021 Africa Cup of Nations.

The Zimbabwe striker grabbed a late winner for Lyon in their 1-0 victory at Angers. Kadewere controlled a Leo Dubois pass on his chest and volleyed in his fourth goal of the season, having scored twice off the bench in the derby victory over Saint-Etienne this month.