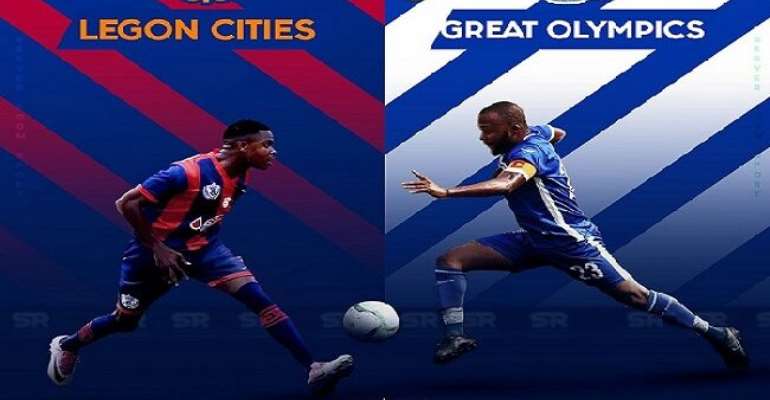 After playing one all with one of the favourites to win this year league, Olympics were set to face their regional counterpart Legon Cities on a Friday evening 20th November 2020.

Great Olympics started the game very well with some sublime passes in the midfield between Razk Kasim and Michael Otuo who found Gladson Awako at the edge of the penalty box of Legon Cities who links up with Mudasiru in a one-two as the final delivery hit the crossbar in the first 10th minutes.

The wonder boys (Great Olympics) dominated the middle of the park as they attacked the Legon Cities with quick transition from defense to attack which found Awako in the final third who then squares it to Maxwell Abbey Quaye in the box of Legon Cities but could not make the best out of it in the 28th minutes.

In the 36th minutes, Baba Mahama and Michael Ampadu combined a couple of passes and move to space which got them into the final third of Olympics but a cross from Baba Mahama was too strong for Raphael Ocloo to find the net.

A pass from Olympics’ captain Maxwell Abbey Quaye to Mudasiru in the opposition half saw him beat two men of Legon Cities men only to be brought down in the arc around the penalty box.

A free-kick was given to Olympics, carefully taken by their poster boy Awako, which deflected to the middle of the net to give Great Olympics the lead in the 45th minutes.

The first ended with Olympics leading by 1-0 and having a commanding possession of 55% to that of 45% of Legon Cities.

The second half saw Goran taking out Francis Addo and bringing in Fadli Yusif. In the 51st minutes, Fadli who had spent just three minutes on the pitch fouled Samuel Ashie Quaye in the penalty box giving the referee no option but to point to the spot.

The penalty was dispatched by Samuel’s elder brother Maxwell Abbey Quaye who found the back of the net, 2-0 in the 53rd minutes. Legon Cities brought on Yakubu Mohammed who tried some audacious shot which was parried by Ben Asare to corner in the 71st minutes.

Olympics took charge again as Samuel Quaye steals the ball from Yakubu Mohammed after he had pressed him in his own half and launch a shot at the edge of the 18-yard box which finds the left corner of the net, 3-0 in the 83rd minutes.

Legon Cities could not get consolation from the time left. The referee brought the game to end with Great Olympics win by 3-0 with three points and a clean sheet.

Gladson Awako won the man of the match. Legon Cities will be looking to have the experienced Asamoah Gyan back as early as possible to help them find their feet as they play Medeama in their next match. Great Olympics will be looking forward to continue this momentum as they face Asante Kotoko in their next game.