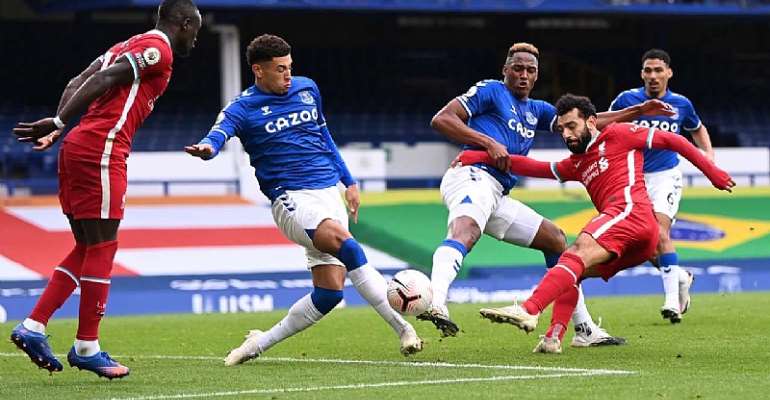 In a game that ended in dramatic fashion, VAR overturned a Jordan Henderson goal to see Everton Draw 2-2 against Liverpool in the English Premier League.

Known as the longest-running derby in English football, the first of the Merseyside derby in the 2020/2021 football season was staged at the Goodison Park on Saturday morning.

Following a good start to the game, Liverpool found their noses in front after just 3 minutes when Sadio Mane powered a shot into the Everton net after connecting to a pass from Andrew Robertson.

With Carlo Ancelotti’s side sticking to the game plan and playing their football, the team will draw parity in the 19th minute. New signing and poster boy James Rodriguez fed Michael Keane with a well-taken corner kick as the defender guided his header past goalkeeper Adrian.

After recess, Liverpool enjoyed the better of possession and continued to push for a second goal.

The efforts of the team paid off after 72 minutes of action when Mohamed Salah smashed home his effort after a poor clearance from Colombian defender Yeri Mina.

Later on the 81st minute, Everton fought back to draw level for the second time on the matchday. This time around, it was the in-form striker Dominic Calvert-Lewin who headed home a sweet cross from Lucas Digne.

In added time, Liverpool scored through Jordan Henderson only for the VAR to rule for an offside, canceling the goal in the process as it all ended 2-2 at the final whistle.

Ghanaians suffering due to mismanagement by Akufo-Addo, Bawu...
9 minutes ago