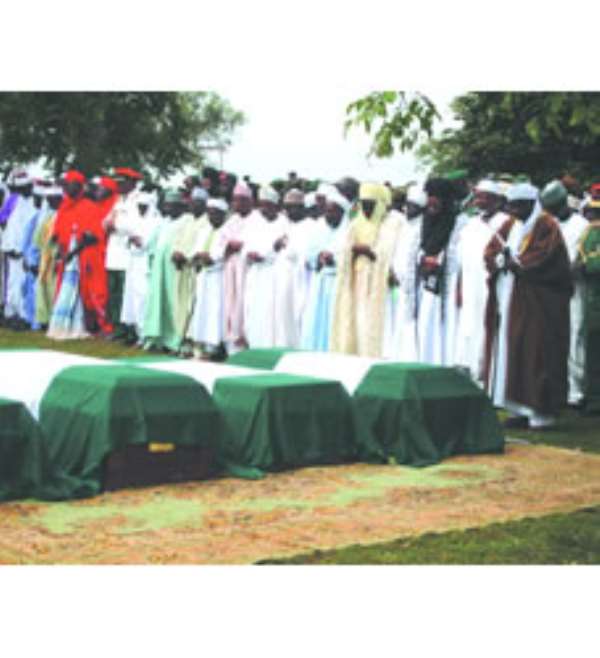 GHANA WAS among the thousands of mourners who thronged the National Military Cemetery, Abuja - Nigeria, to pay their last respects to the 13 Nigerian Military Officers including eight Major Generals who died in the tragic Nigerian Air Force plane crash at Ngokur Hill, Mbakumu Village, in Shangev-ya District in Benue State on Sunday 17 September 2006.

In a solemn and agitated atmosphere, the caskets, draped in the national flags, were carried by pallbearers and conveyed to the graves one by one. It was an atmosphere charged emotions and full of wailing; indeed a national tragedy for Nigeria in general and Armed Forces in particular.

The ceremony started at 1100hrs (LT) with the arrival of caskets containing the remains of the officers. This was followed by short interdenominational church service, followed by wreath-laying.

As part of the ceremony, the next-of-kins of all the deceased were called on one after the other and President Obasanjo presented the Nigerian National Flag to each of them as a symbol of the national duty the Officers were performing.

In an emotional speech, the Chief of the Defence Staff, Lt. General Agwai, paid glowing tribute to the Officers, whom he described as "fallen heroes who are some of the finest Officers the Nigerian Armed Forces has produced".

He noted that the journey they undertook when they met their untimely death was to hold further discussions leading to the modernization and professional posture of the Nigerian Army in the global search for peace and security.

He expressed his appreciation to the wives and bereaved families for the support they have given their husbands through their military career and expressed his condolences to them and assured the survivors of the crash that the Nigerian Military and indeed the Government would do everything possible to ensure that they are given the best medical treatment anywhere for a speedy full recovery.

President Obasanjo, visibly emotional at the ceremony, expressed his condolences to the bereaved families and assured them of the Government's support to them describing the tragedy as unprecedented in the history of Nigeria.


He also thanked all mourners especially those who traveled from the sub-region and former President Kaunda in particular for their solidarity, support and show of comradeship during the country's moment of grief.