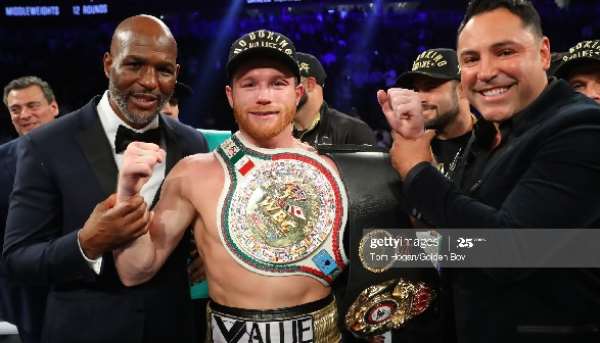 Canelo Alvarez filed a lawsuit on Tuesday in federal court against DAZN and Golden Boy Promotions and its CEO, Oscar De La Hoya, alleging that the parties have not lived up to the terms of an 11-fight, $365 million deal that was agreed upon in 2018.

Alvarez is seeking at least $280 million in damages, according to the lawsuit, which was filed in the U.S. District Court for the Central District of California.

“This lawsuit arises from the breach of the single largest contract in this history of boxing, and one of the largest in all of sport,” the complaint states.

Alvarez last fought in November 2019, when he stopped WBO light heavyweight champion Sergey Kovalev in 11 rounds. Alvarez was scheduled to fight in May, but plans were put on hold because of the coronavirus pandemic. As talks resumed between Alvarez, DAZN and Golden Boy, there was a disagreement over whom Alvarez would face and for how much.

The suit states: “After extended discussions between the parties, DAZN offered to pay Alvarez and Golden Boy Promotions a fraction of the contracted $40 million license fee in cash and some DAZN stock in advance of a potential IPO. However, the entire value of the package -- for a bout against another World Champion -- was substantially less than Alvarez' contractual guarantee.”

It continued: “Given that DAZN had made it clear that it would not honor its contract, throughout the spring and summer of 2020, Alvarez repeatedly asked Golden Boy Promotions to explore alternative broadcast options for a fall 2020 bout. Although Golden Boy Promotions reported that it was talking to various broadcasters, it failed to put forth a single alternative plan by which it would pay Alvarez the $35 million it had promised him for each of his fights.”

The suit alleges that Golden Boy Promotions failed to live up to its fiduciary duty to the Mexican star and that “Alvarez has suffered harm and damages, including, but not limited to, the denied guaranteed payments, lost gate revenue, and opportunities for ancillary revenue associated with bouts, such as sponsorships and apparel revenue.”

For the time being, Alvarez, who has fought three of the 11 fights under his deal, has no fight scheduled.

“I'm the pound for pound number one in the world. I'm not scared of any opponent in the ring, and I'm not going to let failures of my broadcaster or promoters keep me out of the ring," he said in a statement on Tuesday. “I filed the lawsuit so I can get back to boxing and give my fans the show they deserve.”

Stefan Friedman, a spokesperson for Golden Boy, said in a statement that “Canelo's beef is with DAZN.”

“They're the ones refusing to honor the contract by not approving the outstanding opponents we have presented to them and by refusing to pay the contractually required amount,” Friedman said. “Even though our contract specifically gives Golden Boy the right to wait until the pandemic is over and fans can return; in the best interest of boxing, Golden Boy is doing everything it can to make great fights happen. We remain ready, willing and able to make a fight for Canelo as soon as possible.”

Friedman added: “Contrary to the complaint, Golden Boy has an equal approve right over Canelo's opponents. Nobody from Golden Boy ever promised anyone that Canelo would fight any specified opponent. We simply agreed to put on the kind of premiere, history-making fights we worked on together in 2019.”

Officials for DAZN were not immediately available for comment.

LGBTQ+ Bill: You're shameful backward thinker obsessed with ...
28 minutes ago