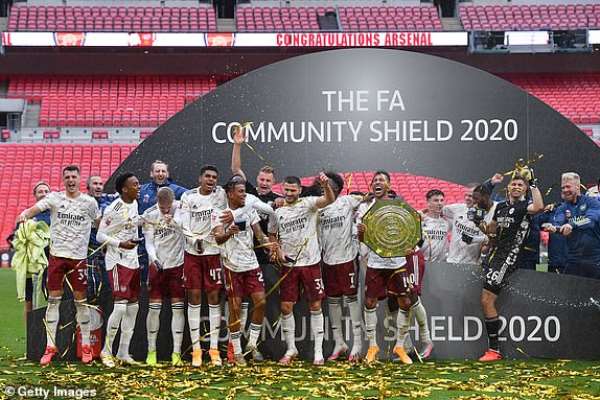 Pierre-Emerick Aubameyang scored a stunning goal along with the winner in a penalty shootout as Arsenal beat Liverpool to lift the Community Shield after the game finished 1-1 at Wembley.

Just 37 days after lifting the Premier League trophy, the Reds made a bright start with Virgil van Dijk having a goal correctly disallowed for off-side and James Milner missing the target with a header from close range.

Aubameyang, who has yet to sign a new deal with the club, then broke the deadlock with a stunning curling finish from the edge of the box for his fifth goal at Wembley this summer.

The Gunners weathered the pressure from Jurgen Klopp's side and came close to doubling their lead with Eddie Nketiah's shot saved by Alisson after a cross from the impressive Bukayo Saka.

Mikel Arteta, who left out Mesut Ozil and Matteo Guendouzi from his squad, saw his side try and shut up shop for long periods of the second half.

The FA Cup winners defended solidly as a unit until the 73rd minute when substitute Takumi Minamino pounced on a loose ball to tuck the ball in from close range.

Arsenal had goalkeeper Emiliano Martínez to thank for making a crucial save late on to block Sadio Mane's shot. Neither side could find a breakthrough and it ended up going to penalties.

In the shootout, the Gunners won 5-4 after converting all five spot-kicks while Rhian Brewster rattled the crossbar with his effort, leaving Aubameyang to score the winning penalty.