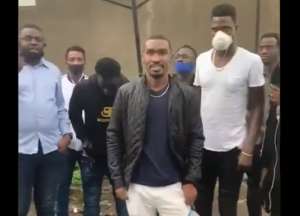 The Ghanaian players stranded in Ethiopia as a result of the Coronavirus (Covid-19) crisis in the country have confirmed that the Ghana Football Association (GFA) has reached out to provide help.

The players that include ex-Black Stars defender Lee Addy and Muntari Tagoe in a video on Tuesday morning called on the government and the GFA for help in order to return home from the East African Country.

With the video going viral, GFA President Kurt Okraku on Tuesday afternoon linked up with Sports Minister Isaac Asiamah to discuss how the players can be helped to return back home.

Speaking to Otec FM, Lee Addy has indicated that the Ghana FA contacted the group on Tuesday evening to ask for the details of all the stranded players.

“We have received a call from the GFA after our video. We've delivered our details and the ambassador's number to them.

“The ambassador also called and explain things to us and we've responded to her. We are waiting for what will happen next”, the defender said.

The Ghana FA and the Sports Ministry are said to have contacted Ghana’s Ambassador to Ethiopia, Her Excellency Mrs. Amma Twum-Amoah and plans are being made to evacuate the players.