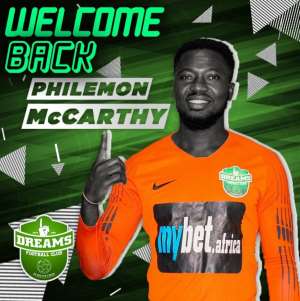 Ghana Premier League side Dreams FC has officially announced that they have completed the signing of experienced goalkeeper Philemon McCarthy.

The Dawu-based club at the start of the 2019/2020 football season in the country enjoyed a fairly good spell. After matchday 4 however, they struggled to keep up with the other clubs as they were exposed for lacking in several departments.

In a bid to strengthen its defensive department, Dreams FC has successfully secured the services of Philemon McCarthy as they look forward to the resumption of the Ghana Premier League which has been suspended for the past 2 months.

According to a communique from the club on Thursday, the former Black Stars goalkeeper inked a three-year contract and will be a key figure in the seasons that lie ahead.

“Dreams Football Club is glad to confirm to its fans the return of experienced goalkeeper Philemon McCarthy who just signed a 3-year contract keeping him at the club until 2023”, a Dreams FC statement said.

This will be the goalkeeper's second stint with the club with his first rodeo starting in 2016.

[Video] We can retaliate but we want the laws to work — Angr...
41 minutes ago