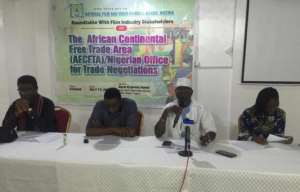 The National Film and Video Censor Board (NFVCB), filmmakers and other key players in the Nigerian film industry, have called for an effective and systematic implementation of the African Continental Free Trade Area (AfCFTA) agreement as it affects the motion picture sector.

They made the call at a Roundtable with film industry stakeholders on AfCTA /Nigeria Office for Trade Negotiations (NOTN) organised by NFVCB on Saturday in Lagos.

Regulators, economic experts, as well as leaders of the various guilds/associations in the Nigerian film industry, popularly known as Nollywood, were present at the event.

The Executive Director /CEO of the board , Alhaji Adedayo Thomas, said that the forum was organised to address perceived challenges , concerns and suggestions that would form the basis for trade negotiations.

Thomas said that opinions submitted by the stakeholders has the potentials to reshape the landscape of the film industry,as it is the stakeholder's input that the board would incorporate for submission to NOTN for implementation .

He noted that film industry stakeholders need to consider and adopt a national position in the negotiation as implementation of AfCFTA will open new frontiers for the sector.

“The Board as the regulator of the film industry has been attending meetings with the Nigerian Office for Trade Negotiations (NOTN) to extract inputs for relevant stakeholders to guide the country’s participation in the implementation of these protocols at the continental level.

“As it relates to the entertainment industry, in our own case, the movie industry, we will be looking at the real and perceived challenges, worries and suggestions that would form the basis for a national position in negotiations of the protocols.

“The Board under my watch has made it a point of duty to engage stakeholders on any issue pertaining to the film industry. This meeting should therefore come up with the stakeholders’ position for the Board to incorporate in the regulator’s point of view for submission to NOTN.

" I challenge you my colleagues to peruse fully the dangers faced by piracy and come up with measures to compliment the efforts of the board to reduce it to the bearest minimum with the AfCFTA offering another challenge, " he said.

Mr Andy Boyo, National Patron , Actors Guild of Nigeria and Chairman of the roundtable, said with the AfCFTA, Nollywood would grow fast when it incorporates with other ‘Woods’of Africa into one giant ‘Wood’ possibly called 'Afrowood'.

Boyo said with the union of all the ‘woods’, investors from all the different countries are more likely to invest because the market would be much wider.

He added that films would then have range of stars and transmitted in Television stations across the continent, which will attract foreign direct investments.

"This will lead to more income generation and high rate of return on investment for the investors/producers as opposed to if the income is only from one country, " he said.

Boyo however advised that Africa must develop its digital infrastructure to leverage upon the continent's population resources like Nigerian music and film, where there is already an appreciable global presence.

The patron noted that the regulation of the activities of businesses like Google and Facebook into AfCFTA would give local alternatives a chance to develop.

Peace Anyiam-Osigwe (MFR) , National President Association of Movie Producers(AMP),urged the Federal Government to put in place regulations that would protect the rights of film makers.

Anyiam, also founder of Africa Movie Academic Awards (AMAA), said this was necessary because Nigerians were usually confronted with the problem of mistrust, prejudice and unfriendly economic policies by some other African countries.

"The regulator must protect us the way the other African countries are protecting their actors, because if they don't, it will kill the film industry , " she said.

Mr Victor Okhai,National President, Directors Guild of Nigeria (DGN), said that “AfCFTA is a great opportunity for the film industry because Nollywood offers services and products .”

Okhai added that for the industry to benefit from the agreement, it should ensure that it has visa free entry into the African countries for at least 90days, 120 days or even nine months as the case maybe.

He proposed that customs and immigration barriers should be lifted across the continent boarders, filmmakers should get temporary employment permit, access to grants and subtle loans.

Okhai advised that intellectual property must be protected across board, while Africa countries must improve its networking infrastructure for easy and fast movement to and fro other business destinations.

He however called on relevant authorities to ensure that all negations were made in the best interested of the nation’s film industry reputed to be the largest in Africa and second on the global stage.

The AfCFTA with its secretariat in Accra, Ghana is a free trade area created by the African Continental Free Trade Agreement among 54 of the 55 African Union (AU) nations.

The free-trade area is reputed to be the largest in the world in terms of the number of participating countries since the formation of the World Trade Organisation.

The main objectives of the AfCFTA are to create a continental market for goods and services with free movement of people and capital and pave the way for creating a Customs Union.

It is expected to grow intra-African trade through better harmonisation and coordination of trade liberalisation across the continent.

According to the United Nations Economic Commission for Africa(UNECA), the AfCFTA is projected to lift intra-African trade by as much as 52 per cent by 2022.

Hottest Photo Reports
Catch up with all the political quotes from our politicians.
Advertise here
More from Nollywood Media
ModernGhana Links
CLIMA Africa Awards 2022 Nominees List Is Out!
"Bobrisky never really made me” James Brown talks about her relationship with Bobrisky, going to prison, and future aspirations #WithChude
African Renaissance and Diaspora Network appoints Nomcebo and Akejuas ambassadors
TOP STORIES