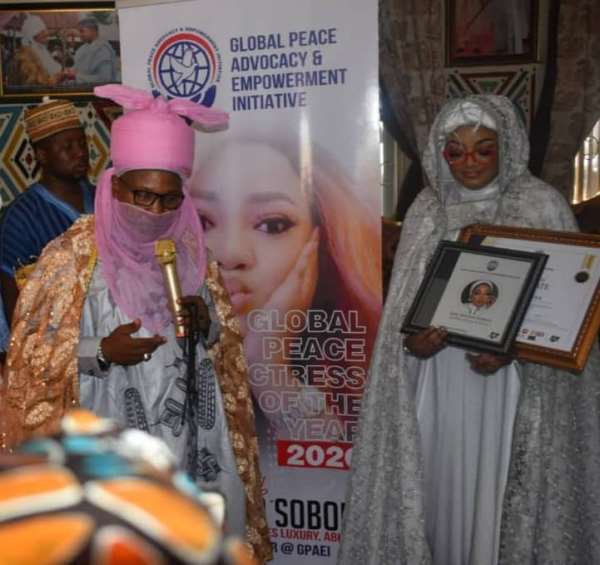 In Nigeria, a famous multi-talented Nigerian Actress, Tayo Sobola, popularly known as "Sotayo Gaga", has been honoured with the Award of "Global Peace Actress of the Year 2020". The prestigious peace award was presented to Amb. Tayo Sobola by HRM(Dr.) Ahmed Abdullahi Hassan, the Emir of Uke Yakanaje Emirate, who is a Life Patron of Global Peace Advocacy and Empowerment Initiative(GPAEI).

During the visit to the Emir of Uke Yakanaje Emirate at his palace in Uke Karu LGA in Nasarawa State, Amb Tayo was also conferred with a Chieftaincy Title as "Sarauniya Uke(Queen Mother of Uke)" by HRM(Dr.) Ahmed Abdullahi Hassan. Amb. Tayo however expressed overwhelming gratitude to the Emir of Uke for considering her worthy for such a distinguished Title.

She also appreciated Global Peace Advocacy and Empowerment Initiative(GPAEI) for recognising her with the Merit Award of 2020 "Global Peace Advocacy and Empowerment Initiative Actress of Year". She was also few weeks ago honoured with Sodex Records Merit Award and has been nominated for the prestigious Africa Icon Awards, which is one of Africa's biggest award event, holding on the 24th of July 2021 in Accra Ghana. According to reports Actress Tayo was nominated for both awards by the DG of GPAEI, Amb Badamasi Sadiq.

In a brief discussion with our Reporter, the DG of Global Peace Advocacy and Empowerment Initiative(GPAEI) Amb. Badamasi Sadiq, noted that the recognition and honours on Tayo Sobola was premised on her outstanding performance in the area of promoting and advocating for peace.

Amb Badamasi further noted that his choice on her nomination for both Sodex Records awards and the forthcoming Africa Icon Awards was as a result her humility, kind-heartedness, goodwill and most importantly their resourceful relationship over the years. He therefore congratulated Amb. Tayo Sobola and encouraged her to remain devoted and committed to the visionary engagements of promoting sustainable peace within Nigeria and across the globe.

Flyover construction: 1 month interruption of traffic at Flo...
4 minutes ago