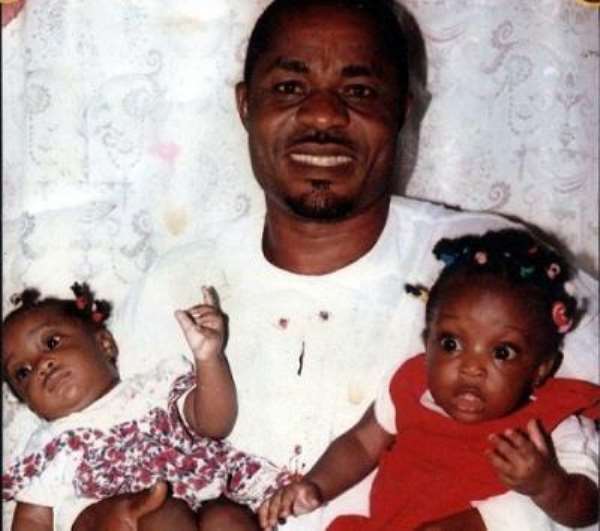 According to what Daily Times reported; it has been over a year since Samuel Eleng and his wife, Favour, lost their two-year-old twin daughter at the Children's department of the Canaan Land, Winners Chapel headquarters, Sango-Ota in Ogun State, and yet, there
is no sign of the girl.

The couple are still stunned by the mysterious disappearance of Praise on
April 17, 2011, an Easter Sunday.

Although the Church's founder, David Oyedepo, was said to have shown support to the family, however, Samuel alleged that the Church had been meddling with the case to prevent it from going public.
“We handed our girls, Praise and Glory, over to the school teachers under whose custody many other children were kept.

They gave us two tags as proof that we had our children under their care for that day,” said Samuel.

However, by the end of the church service, Praise had gone missing from the class in which she was left.

Even the teachers in charge of the twin girls were not in sight, as they were said to have all gone for service as at the time the couple went to get their daughters.

“I saw my wife around the vicinity of the Children's section, she was crying. She told me that Praise was missing,” he said.

Samuel said they eventually got hold of one of the four teachers supposedly in charge of the children's class, who was also at a loss regarding the whereabouts of Praise.

“She claimed not to know but advised us to check other classes. So we started moving around from class to class, around the church premises,” he continued.

By then apprehensive but still hopeful, the couple waited until after the service and reported the matter to Oyedepo, who prayed and joined them in the search.

“He (Oyedepo) walked with us to the Children's department and after praying, he said he has not seen any evil signal,” Samuel said.

However, a more frantic search for Praise was not successful as the hours harrowingly dragged on into days and months for the troubled family.

“I was thinking so many things; how can I come to the house of God and my child will suddenly disappear? Even if it was time for rapture, how can it just pick my child only?” Samuel said.

Thwarting police investigation
The case was later reported by the church's Chief Security Officer, Supol Cosmas, at the Police Area Command in Onipanu, Sango-Ota in Ogun State, where one Ijeoma Lawal was assigned as the Investigating Police Officer (IPO).

A source at the police station said that Samuel was questioned but the four teachers directly connected to Praise's disappearance were prevented from making statements.

The source also claimed that a call had come from a senior pastor of the church asking the police not to interrogate the teachers because they had volunteered for the job and should not be put through any hassles.

“The caller told the police that the church will handle the matter themselves and the four teachers were promptly released,” said the source.

After there appeared to be no headway in the efforts to find Praise, Samuel said he became disturbed and suggested that the case be made public.

With photographs of his missing daughter and his wife in tow, Samuel got an interview at the Africa Independent Television (AIT) in Alagbado, Lagos.

But when Samuel's plea to the public for information aired on the station, the broadcaster gave the impression that Praise had disappeared at the couple's Satellite Town residence, and not the Winners Chapel.

“I called the AIT man named Desmond to complain and he told me that was the instruction he received from the church.

Even the IPO called me to say that she watched the broadcast and was shocked at what was reported,” he said.

Samuel added that his complaints about the AIT broadcast to the church were also not taken seriously.

“Is it a sin for me to go to a church of God with my family? This is a year that my child disappeared under the church's custody.

How can I go to AIT only to have a different thing shown? How can the church interfere with police investigation?” He asked.

Samuel claimed that, in the same week his child got missing, he had suggested that the four affected voluntary teachers be invited for questioning with Lawal in attendance.

But none of the voluntary teachers nor the Investigating officer showed up for the meeting as the Elengs and a neighbour, one Blessing, who had accompanied the couple, waited in vain.

Also, last August when Samuel had gone to visit Lawal, he said he was welcomed with congratulatory messages from police officers at the police station, who claimed to have received a call from the church informing them that Praise had been found and that the case be withdrawn.

In the same month, thoroughly dissatisfied with the way his church was handling the matter, coupled with the meddling, Samuel took matters in his own hands.

One Sunday, Samuel said he went to the Church's Children Department and bared his anger by declaring that no kid should go in unless his daughter was found.

Samuel said his attitude was promptly reported to Oyedepo, who warned him never to go near the Children's department again.

Before then, according to Samuel, Oyedepo was in constant communication with him, but since the classroom incident, “he stopped taking my calls and no more talk about my missing daughter.”

Calls for more prayer
Samuel said he did not meet Oyedepo again until recently when they met on April 12, 2012, almost a year since his child was missing.

“I told him (Oyedepo) that my child was still missing and he said 'be prayerful, the Lord will strengthen you and your child will be found',” Samuel said.

A source at the church however claimed that a handful of church members, including Cosmas, who also doubles as Aide-de-camp to Oyedepo, are making efforts to find Praise.

The source also said that series of meetings were recently held by the church, where the four teachers were invited.

When called to confirm the report, Lawal declined to comment on the issue, saying, “please, don't involve me in the matter.”
Cosmas also denied any knowledge of the incident, appearing to be more interested in how Daily Times got his number.

However, Desmond confirmed that Praise's disappearance was reported and broadcasted by the television station a year ago.

The Elengs are now at a crossroad, torn between reverence for their church pastor whom they fondly call 'Daddy', and their filial love for their child whom Samuel referred to as “our first fruit”.

Also, the couple's pain has recently been heightened by Glory's constant queries about her missing sister.