Incompetent Former President Mahama Should Back Off And Allow The Competent President, Nana Addo, To Continue His Good Works 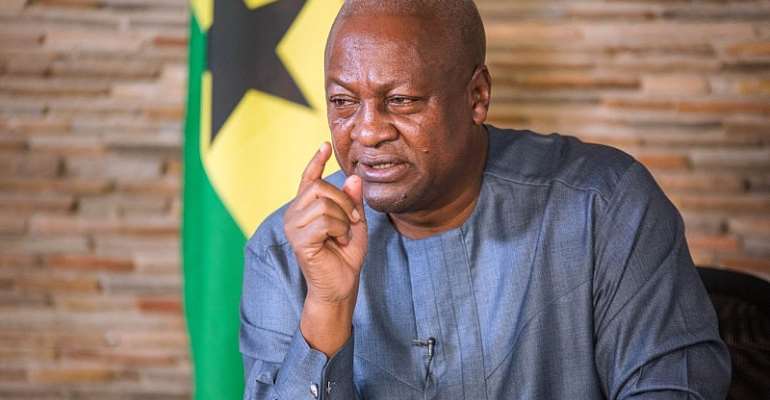 Former President Mahama appears to still be in shock since his monumental defeat in 2016. Since then, he has always been found to be wailing and lamenting instead of acting as a statesman. In recent times, he has deliberately been absent from all state functions. This is a clear demonstration of bad faith from a bad looser.

NPP Germany © is appalled by this conduct of Mr. Mahama. Ghanaians recall that the NDC quickly put together a COVID-19 response team which was later exposed as a propaganda machine to be used to counter the government's measures of containment. Why will Mr. Mahama seek to parallel a lawful state institution by setting up his own?, We would like to remind the NDC, that, there is only one President in Ghana, in whom, all state authority is vested.

After failing woefully to make any meaningful impact with his propaganda COVID-19 response team, we have seen Mr. Mahama mischievously, going round distributing relief items. This conduct of his, is mischievous, to the extent that, he has ignored the constituted body responsible for receiving all donations for onward disbursement to the vulnerable and decided to, in his bid to score cheap political points, reinvent his own distribution. A true statesman will seek to complement the sitting government in order to send a signal of the unity of purpose to the citizenry in these difficult times but, that's not to be for Mr. Mahama.

In recent times, Mr. Mahama has tried albeit unsuccessfully, to pit the heads of Ghanaians against the government. What he does is, he deliberately makes wild requests on government even when he knows that major economies like America, Italy, France, etc are crumbling because of the impact of the pandemic.

While the government has presented a comprehensive COVID Alleviation Programme (CAP) to parliament, which contains a detailed assessment of the economic implications of COVID and plans of mitigation, Mr Mahama ignores the contents thereof, and pursue absurd tangents in his mischievous attempt to cast a snare on government. As a true open-minded person, one would expect that, you study the government's document which is public, make inputs rather than engage in tangential.

Even when in good conscience, the President makes very far-reaching interventions to ease the burden of the pandemic on Ghanaians, Mr Mahama characteristically tries to cheaply appropriate credit to himself as the initiator. We would like to refer Mr Mahama to government's COVID ALLEVIATION PROGRAMME (CAP). In that document, there's a systematic approach outlined by the government to deal with the pandemic. We have observed a trend of him preempting government and turning around to appropriate credit to himself. And so when he knows the President is addressing the nation say today, he quickly says something beforehand and if something similar appears in the President's address, he and his NDC apparatchiks come to hail themselves. This is nothing more than political masturbation. Whatever the President says, is borne out of a well-thought-out plan and not driven by the bewildered thoughts of a bad looser.

Further, using his treacherous Facebook live platform, Mr. Mahama has pontificated himself as a saint whose government made Ghana a heaven. The debacle of the Airbus scandal which ostensibly implicates Mr Mahama appears to be a no go area. He has refused to address the issue but rather use the platform for self-praise and taunting of government. We wish to remind Mr Mahama that, contrary to his long-held belief that Ghanaians have short memory, we remember every single skirmish that broke out in his administration. It will do him a lot of good to portray himself as a repented prodigal son than to be talking saintly.

NPP Germany © commends the President for his approach to dealing with the pandemic. We urge the government not to pay attention to a desperate bad looser and his henchmen whose aim is to frustrate the good work of government. The trick of pissing in by the NDC has long been uncovered and as such, lacks the potency to destruct the President from delivering on his mandate. The attempt to draw parallels between the Ebola epidemic and this pandemic, exposes the cerebral weaknesses of the NDC. To educate the NDC, Ebola was an Epidemic, while COVID 19 is a Pandemic. The two are not the same in weight, and impact. Can Mr Mahama tell us what practical steps he instituted to handle Ebola? We are not aware of anything extraordinary except that, Ebola is incomparable to COVID. That argument should be put into the dustbin of history.

We call on Ghanaians to continue reposing confidence in the president and grant him unflinching support. Ghana is in safe hands.