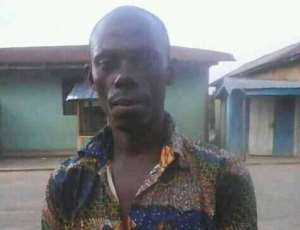 A 45-YEAR-old man has been found allegedly murdered in a bush at Nnerebehi, a farming community in the Atwima Nwabiagya South Municipality of the Ashanti Region, barely two weeks after a woman in her 30s was found dead in the same area.

The incidents, suspected to be ritual killings, have threatened the security of the area and thrown the helpless residents into a state of fear and panic, wondering who will be the next victim.

The lifeless body of Kwame Awuah, a mason-cum-farmer, was found on his farmland last Saturday morning by a colleague farmer.

He quickly rushed home to inform the wife of the deceased person.

The cause of Awuah's death was not immediately known, but the fear-stricken residents did not rule out ritual murder, considering the circumstances surrounding the death of the two.

Appiah Kubi Augustine, alias Apushme, who was at the scene, claimed the deceased was last seen on Saturday around 7:00 am, and was later found dead hours after going to his farm.

The Assemblyman for Nnerebehi Electoral Area, John Hawkson Anane, confirmed the sad incident, and said the body had since been taken to the Frimpong-Boateng Medical Centre (Toase) morgue for autopsy, while police at Nkawie had launched investigation into the deaths.

He disclosed that Awuah's body which was lying in a prone position was already decomposing, something which he found to be mysterious.

“It baffles almost everyone in this community why his body could be in that decomposing state because many saw him going to his farm. We cannot just understand it because he died today and was found today around 5:00 pm, so why his decomposing body,” the assemblyman wondered.

The Assembly member, who is also the Presiding Member for the Atwima Nwabiagya South Municipal Assembly, appealed to the police to expedite investigations and bring the perpetrators to book.

He also called for increased police presence to boost security in the community and its neighbouring communities.

Mr. Anane also advised the residents to be extra vigilant and security conscious, and refrain from going to their farms alone to prevent future occurrences.

“Find someone to go to your farms with, 'don't just go alone',” he admonished.

Meanwhile, the Chief of Nnerebehi, Oheneba Bona, has performed the necessary rituals on the banks of River Offin, where the dead body of the woman was found two weeks ago.