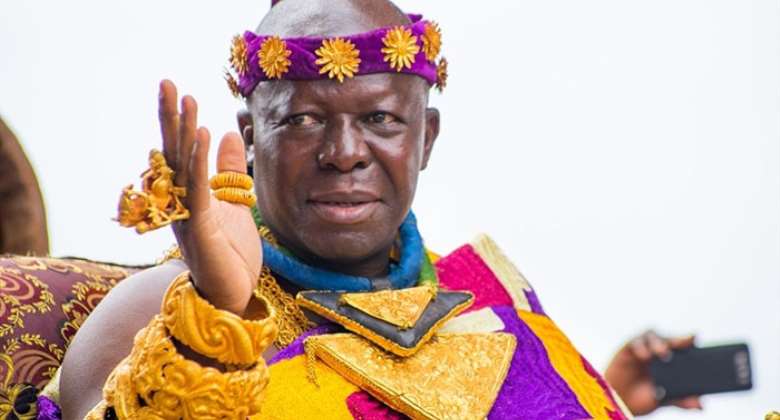 He succeeded his brother, Otumfuo Opoku Oware II, who joined his ancestors on April 26, 1999, at a colourful traditional ceremony at the Manhyia Palace.

At a swearing in ceremony in 1999, Otumfuo Osei Tutu II firmly gave an assurance to lead the Asante Kingdom into newer heights, and true to his words, he appears to be fulfilling his promise.

Otumfuo Osei Tutu II has managed to combine tradition and modernity to transform the Asante Kingdom, and his exploits have been felt beyond the Ashanti Kingdom and even the entire Ghana.

Known as Barimma Kwaku Duah in private life, Otumfuo Osei Tutu II is a prominent member of the Oyoko royal family of Asanteman, who are the occupants of the Golden Stool.

Born in Kumasi on May 6, 1950, Barimma Kwaku Duah was the last child of the late Asantehemaa, Nana Afia Kobi Serwaa Ampem.

Described widely as humble, focused and respected person even in his childhood days, he was educated in Ghana and abroad, especially in the United Kingdom (UK).

After climbing high the academic ladder, Barimma Kwaku Duah worked in the UK and other countries for sometime before returning to Ghana to start a transport business.

The kingmakers unanimously chose him as the next king when the great Asante throne became vacant in 1999 following the passing of Otumfuo Opoku Ware II.

Usually, on the every April 26, the elite in society, such as presidents, ex-presidents, chiefs, government officials and others, visit the Manhyia Palace to wish Otumfuo well.

Due to the outbreak of Covid-19, the fanfare and merrymaking that usually characterizes Otumfuo's ascension to the Golden Stool at the Manhyia Palace were absent yesterday.

But the dangerous virus could not stop scores of people from celebrating the king for chalking up yet another milestone on the sacred Golden Stool.

Scores of people were seen posting different elegant-looking pictures of the Asantehene on the various social media platforms, with warm wishes to him.

Some of them enumerated the various achievements of the Asantehene during the past 21 years and also prayed for long life, more wisdom and sound health for the king.

During his maiden address as the 16th Asantehene, he said the days when tribes and communities waged war against one another for territorial expansion and power belonged to history and stated emphatically that diseases, ignorance and poverty are the common enemy of mankind, which he would lead Asanteman to defeat.

He quickly set up the famous 'Otumfuo Education Fund', which he used to gather resources to help assist brilliant but needy students to climb high the academic ladder.

The fund, which has existed for two decades, has helped millions of Ghanaian students from the various ethnic groups in all the 16 regions to realize their academic goals.

Through the Otumfuo Education Fund, scores of medical doctors, nurses, teachers, pharmacists, journalists, lecturers, lawyers, judges and others have been produced.

He has also initiated numerous development projects and supported other national mobilization efforts.

Otumfuo, whose fame and respect transcends beyond the borders of Ghana, has during the past 21 years travelled wide across the globe to market Asanteman and Ghana.

For instance, he has visited Queen Elizabeth of England and other prominent monarchs across the globe and has likewise received world leaders at the Manhyia Palace.

Otumfuo, a true democrat, who respects divergent views and the right for people to freely worship God, has also visited Pope Francis at the Vatican City for discussions.

Just last year, the Asantehene was invited to the United Nation's General Assembly in New York, where he gave a brilliant speech about his unique leadership style.

Otumfuo Osei Tutu II, who is the Chancellor of the Kwame Nkrumah University of Science and Technology (KNUST) in Kumasi, has helped the KNUST to also improve greatly.

The Asantehene's positive works for Ghana has also been recognized across the world, as several top universities have awarded honorary doctorate degrees to him.