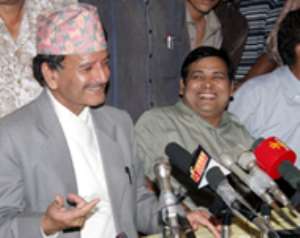 The Nepali government and Maoist rebels have agreed to end attacks on each other's bases, stop recruitment, and work for peace.

Ending the opening round of their first peace talks since 2003 late on Friday, they also agreed to a 25-point code of conduct which commits both sides to cease provocations and stop showing and using arms to intimidate people.

They also promised early elections for a special assembly to draw up a new constitution and plan the future political system.

Nepal has gone from being an absolute monarchy to a constitutional one, but the country was thrown into disarray when King Gyanendra dissolved parliament 15 months ago. The Maoists want to abolish the monarchy altogether.

Krishna Bahadur Mahara, the chief rebel negotiator, said after meeting the government team: "We have already agreed on our main political agenda.

"Now, we have ... to quickly elect the constituent assembly."

Krishna Prasad Sitaula, the interior minister and chief government negotiator, said: "We are convinced that there will be no more bloodshed."

More than 13,000 people have died since the Maoists began the revolt in 1996 in the western hills of Nepal.

The Maoists now control huge swaths of the countryside.

Under the 25-point code of conduct, the Maoists will allow basic services such as health, distribution of food grains and development projects in their areas.

Forced collection of donations will stop, and schools as well as businesses will be allowed to function, the code said.

"This time we have come for talks with seriousness and with a greater sense of responsibility for the people," Mahara said. "We don't want to return to war again."