To Crack Down On Free Press, Somalia Accuses An Imprisoned Journalist Of Being Member Of ‘Terror Group’ 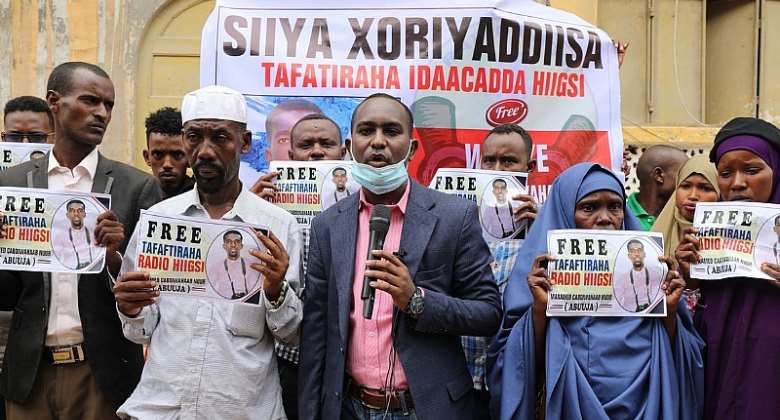 In a statement on Wednesday 22 April, the Information Ministry weirdly and without any proof of evidence alleged that the imprisoned journalist “is a member of al-Shabaab”.

These allegations only came after press freedom advocate groups including SJS on Monday this week protested against the continued arbitrary detention of journalist Mohamed Abuuja and after the Ministry of Information itself previously said that it was not aware of the journalist's arrest.

“This last action of the Somali government's accusation against journalist Mohamed Abuja is a well calculated move to send a chilling message to journalists and other critics that the government does not tolerate criticism.” Abdalle Ahmed Mumin, Secretary General of the Somali Journalists Syndicate (SJS) said, “The new trend of threats used by the Somali Federal Government and its security agencies against freedom of the press is very dreadful.”

Mohamed Abuuja has been working as a journalist for more than seven years now and has a record of professional journalism. Officers from National Intelligence and Security Agency (NISA) illegally and without a warrant of arrest detained him on 29 February 2020 only three days after he wrote a very critical editorial article criticizing the ethical behavior of the security forces. He was released on 02 March, without charges. After his release, the journalist told SJS that he was tortured in the detention.

On 7 March, same officers from NISA re-arrested the journalist and held incommunicado until today. He neither had access to a lawyer nor was he presented to a court of law. His family told SJS that they were not given access to see him.

“We call for the authorities to stop these threats and immediately demand that the editor of Radio Hiigsi, Mohamed Abuuja should have urgent access to a lawyer and his family. Also he should be released or produced in a civilian court to hear his case,” adds Mumin.

SJS is extremely concerned by the new tactics employed by the Somali Federal authorities meant to intimidate journalists and to limit the freedom of speech and that of the press in Somalia. On 02 April, NISA publicly threatened Voice of America (VOA) journalist, Harun Maruf with legal actions, for allegedly having links that are threat to national security. This is in addition to the public threats by the Information Minister, Mohamed Abdi Hayir (Maareeye), who in October last year, described local media and their journalists to be “abetting al-Shabaab” due to their security related coverage. (END)

Hottest Photo Reports
Catch up with all the political quotes from our politicians.
Advertise here
More Somalia
ModernGhana Links
Panel Discussion on Safety of Journalists and Human Rights Defenders during the Elections concluded in Mogadishu
Veteran journalist assassinated in Mogadishu suicide attack
State media director killed; others injured by a suicide bomber in Mogadishu
Widely Condemned Eviction And Deportation Of Southerners From Self-Proclaimed Republic Of Somaliland
Federal Government Of Somalia Had Set Seven Days Ultimatum To Africanunion Envoy To Absquatulate The Country
Long-Delayed Polls For The Lower Chamber Of The Parliament Hadfinally Kicked Off
Universal Suffrage That Will Destigmatize Semi-Autonomous Region Of Puntlan
Journalists trained and poised to report on Somalia’s ongoing elections
Journalists arrested in Lasanod and Mogadishu
TOP STORIES