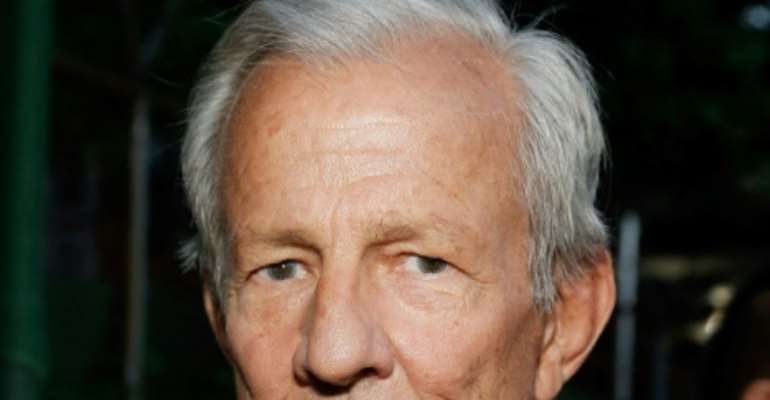 Peter Beard, a daring photographer known for capturing wildlife at close range, has been found dead in a wooded area of a state park in Long Island nearly three weeks after going missing. By JP Yim (GETTY IMAGES NORTH AMERICA/AFP)

Peter Beard, the influential photographer renowned for his wildlife shots, was found dead after going missing several weeks ago. He was 82 years old.

"We are all heartbroken by the confirmation of our beloved Peter's death," his family said in a statement.

Beard, who was suffering from dementia, went missing on March 31.

A hunter found his remains over the weekend in a remote wooded area of a state park in Long Island, east of New York City, local police said.

Police were called to the site in Camp Hero State Park in Montauk, on the tip of Long Island, and the deceased's clothing was found to match those Beard had worn.

Known for his death-defying images of African fauna, Beard's text and photo book "The End of the Game," first published in 1965, captured the destruction of a continent long seen by colonialists as a treasure chest.

A woman observes the photograph titled "Large Crocodrillos" by Peter Beard at Sotheby's in 2008 for the Quillan Collection of Nineteenth and Twentieth Century Photographs. By TIMOTHY A. CLARY (AFP/File)

A man as wild as his photographs, Beard had a brush with death when he was trampled by an elephant in the 1990s and was known to rope rhinoceroses.

"Peter was an extraordinary man who led an exceptional life. He lived life to the fullest; he squeezed every drop out of every day," his family said.

"He was an intrepid explorer, unfailingly generous, charismatic, and discerning. Peter defined what it means to be open: open to new ideas, new encounters, new people, new ways of living and being," the statement continued.

"He died where he lived: in nature."

Born into privilege on January 22, 1938 in Manhattan, Beard attended some of the US east coast's most elite private schools but was by his own account the family's black sheep.

Beard was a regular at the iconic Studio 54 disco club and a mainstay in the fashion world, famously discovering the model Iman in Kenya and photographing some of the world's top supermodels -- and carrying on high-profile dalliances with several of them.

He had well-documented trysts with both Candice Bergen and Lee Radziwill, Jackie Kennedy's sister, and was married three times.

"It's marvelous that death is an end -- what's the matter with that?" he said during the 1977 opening of his ICP show.

High attendance on first day of parliament's 3rd meeting of ...
17 minutes ago