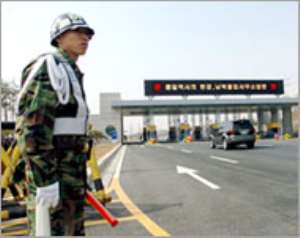 North Korea has cancelled a trial run for a railway line that is to cross the heavily militarised border with the South.

Reconnecting the rail lines would have been a deeply symbolic step in generally warming ties between the two Koreas; the last time a train crossed the border it carried refugees and soldiers wounded in the Korean war more than 50 years ago.

Shin Eon-sang, Seoul's vice-unification minister, said Pyongyang had cited a lack of military guarantees and the unstable situation in the South for its decision to cancel Thursday's pilot run.

Shin said in a statement: "We believe it is deeply regrettable that North Korea has unilaterally postponed an event that had been agreed to several times."

He declined to elaborate on what unstable situation in the South the communist state was referring to, or whether he thought the North's military was rejecting the project.

South Korea is keen for trains to cross the border, but officials in Seoul say the North's powerful military has been reluctant to sign off on a plan for through-trains in the sensitive border area.

The test runs would have covered a small length of track on rail links running along either side of the peninsula.

The western rail link would help in the shipment of goods in and out of an industrial park in Kaesong where South Korean firms make goods at factories using cheap North Korean labour and land.

The eastern link would help tourism. A Hyundai group affiliate that runs the Kaesong industrial park also runs a mountain resort in North Korea on the east coast that millions of South Koreans visit.

Shin said it was too soon to draw conclusions on what this signalled for ties between the two countries, which technically remain at war since the Korean war ended in only a truce.

The rail links through the Demilitarised Zone (DMZ) - a 4km wide buffer zone that is a no-man's land - run through plains and hills that are now cleared and demined but remain largely uninhabited.