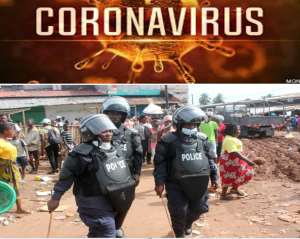 Like some Liberians, I too have subterranean respect for Mr. Tolbert Nyenswah. Apart from being the former director of the National Public Health Institute of Liberia, he led the Incidence Management System (IMS) in the country during the deadly Ebola crisis in West Africa. Therefore, it is without a doubt that he has garnered some facade of credibility for himself as an established Liberian public health figure. However, his most recent quarrel in FrontPage Africa and other local dailies that lockdown to prevent the spread of the COVID -19 does not apply to Africa, especially Liberia, is a pure guess. Hence, he is downright wrong.

Apart from being empirically and hypothetically wrong, Mr. Nyenswah's ill-timed remarks would embolden a vast segment of the population in Africa, especially Liberia, from respecting the globally tested probability of social distancing and lockdown. It is also untimely that Mr. Nyenswah, a former director of a national public health agency in Liberia - An equivalent of the U.S. Centers for Disease Control - can voice such unproven, unscientific, unwarranted, and policy deficient inference, especially so for a seemingly illiterate Liberian and African population.

According to FrontPage Africa, Mr. Nyenswah made these remarks while speaking on a Truth FM Breakfast Show, a local radio station in Liberia. So let us surgically scan his urgings based on FrontPage Africa's report:

He (Mr. Nyenswah) maintained that poor sanitary conditions, the lack of electricity, high rate of unemployment, among others, make the imposition of a lockdown mandate to prevent the spread of the coronavirus inapplicable in Liberia.

Counter-argument: Mr. Nyenswah's principle does not controvert the reason why a lockdown is required and necessary in the first place. He misses the point and the object as to why expert policymakers around the world believe a lockdown is necessary. Firstly, the necessity of lockdown relatively applies to Africa and anywhere where human development and human security are at risk. Besides, the current Coronavirus crisis has different attributes and pieces of conditionality, such as health, social, economic, global, and national considerations, and above all, survival reality check. Unless Mr. Nyenswah can judiciously contend that Liberia is the only country where individuals in authority and power don't think nor consider the broader implications of issues and crises. Besides, most governments around the world, including that of the United States, Canada, Germany, Uganda, and others, are not urging a lockdown because of unemployment, the lack of electricity, and poor sanitary conditions. They are doing so to guarantee and sustain human security – which may include the protection of life and the prevention of social, economic, and political meltdown.

So, to conjecture, as Mr. Nyenswah did, that since lousy governance, corruption, and greed denied African countries and people of essential social services and fundamental economic prosperity, it means that broader human development and human security considerations do not apply to the continent is like mixing apples with oranges at childbirth when a would-be mother does not care.

Of course, we can all agree that protocols in Liberia are discouraging because capacity is lacking. Furthermore, the administration does not seem to be showing competence in educating Liberians, in mobilizing Liberians to a common cause, and around basic issues. In addition, there seems to be a rigid disconnect between the individuals in authority and those in the field. As such, the administration and the Liberian public are not on the same trajectory. Had this not been the case, the Liberian security forces and police would have utilized community policing that would have inspired Liberian communities to be in tune with the announcements and mandate of the Liberian administration for the common good of the population. But that does not seem to be the case given the many complains from communities. Should this invalidate the administration’s appeal for a brief lockdown in Liberia to prevent an entry of a deadly global crisis that rich nations are struggling to manage? Absolutely not.

He (Mr. Tolbert Nyenswah) added that Liberia's health system remains backward as compared to countries in the Americas, Asia, and Europe that have already introduced a lockdown to curb COVID-19. Mr. Nyenswah pointed out that it is impossible for residents of slum communities in Liberia, including West Point and New Kru Town, to be contained in their respective homes for a couple of weeks without the provision of adequate and essential social services to guarantee their survival and enforce the lockdown exercise.

"What works in the United States, China, South Korea, or Italy, could not apply to countries in Africa, including Liberia. Our health care system, social interactions, our communities are not the same as you see in the West. Where I live in the United States, we have lockdown here; but you can walk to a supermarket and buy your groceries and bring your food home, and you can stay home for as much as three or four weeks as you want to be home."

Counter-argument: Again, there is no commonsensical compatibility for this supposition and discernment. The lockdown is for reasons unrelated to why a natural resources-rich country like Liberia does not have an improved or equipped healthcare, educational, and economic systems. Hence, stirring misconceptions in no way sells Mr. Nyenswah's spat as to why Africa and Liberia, in particular, should not have a lockdown to curb or resist the devastation of COVID-19. It is one thing if Mr. Nyenswah argues a fairer case, including asking the hard questions as to why African countries or governments, including Liberia, denied their people essential services and opportunities such as better health care system and more. Moreover, Mr. Nyenswah has worked in successive Liberian governments for more than 12 years, serving as an assistant minister of health and director of the country's public health agency. The question is, didn't he see the need to advance the concept of having a better health care system in Liberia, as a policy objective for his bosses?

"Part of the work I (Mr. Nyenswah) do (in the USA now) unless it is necessary to go to work, that's the only time I had to go. But we do much work on the computer; we have zoom meetings, skype meetings - when I was talking to the BBC, I was right in my home. Can you keep someone in West Point to stay home for those numbers of days? It's impossible. The sanitary condition in West Point, New Kru Town and other parts of our country-people don't have electricity - people live on daily food by going to the market to buy food; people are unemployed, and they have to do businesses in Red Light, Water Side or Duala before they have food to eat"

Counter-argument: Given the above, it would also seem befuddling that Mr. Nyenswah thinks what happens in the western world cannot or is not happening in Africa. Of course, people can telework, use computers, computer applications and systems such as Zoom, Skypes and many more for meetings and other things in Africa if they choose to as a people and nation. Africa or no country in Africa is allergic to technology. Most countries in Africa, including Liberia, do not have advanced technology for one simple reason: Most of the people who run public institutions in African countries, as Mr. Nyenswah did, do not see the need to ensure that those opportunities exist until they leave the office or are kicked out of power. Also, most African officials wouldn't see the need for private-sector job and wealth creation, investment in food security, workforce training, and community development until they are out of office or power.

Besides, as a then assistant minister of health and later director of the NPHIL, Mr. Nyenswah could have still worked from home some days in Liberia if he and others in government then were innovative enough to ensure that such a system is in place. But they did not. Hence, his argument does not eliminate any basis why he thinks a lockdown is inapplicable in Africa, especially Liberia.

While I still maintain the utmost respect for Mr. Nyenswah, he is wrong in his propositions and conclusions because his entire postulation is foreign to the optimal purpose behind the lockdown, which is to curtail the impact of the COVID-19. Likewise, Mr. Nyenswah and all those clamoring to use the directional response to the 2014 -2015's Ebola contagion in West Africa should desist from heralding a botched process. First of all, the white-collar response to the Ebola crunch in West Africa was out of order and marred by open theft of public funds, the misused of resources as well as widespread corruption not just in Liberia but in Guinea and Sierra Leone too. To date, authorities in the West African Ebola-affected countries cannot account for funds provided by international donors. Donated Vehicles designated for use during the Ebola crisis were also pilfered and used for personal purposes. Therefore, such an inadequate directional response cannot be a model for global reference in dealing with a global health crisis such as COVID-19.

Finally, Mr. Nyenswah is right on one thing: That conditions in Africa, especially Liberia, are appalling. These conditions are undesirable because our leaders and governments in Africa, especially Liberia, neglect the basics of upright governance, such as but not limited to investment in innovation as well as in physical and human development. Where Mr. Nyenswah is conspicuously wrong is in his beholding of the atypical but unique Liberia's mindset that Liberia is the only country of impossibilities – The only people that cannot break away from the status quo.

This obdurate mindset is so ingrained in the majority of the Liberian population so much that if one speaks of the need for transparency, accountability, prevention of corruption, punctuality, and regular work attendance in the country, all you hear is it won't work in Liberia. If one says let absentee parents be court-compelled to pay child support to single parents, all you hear is it won't work in Liberia. Almost everything that works in other countries, including even Ghana, our next-door neighbor, does not apply to Liberia. This mindset has to change because what works in other countries can also work in Liberia, even if it is not precisely the same.

About the Author:
J.N. Williams is a Catholic educated public philosopher and a U. S. trained public policy and institutional governance professional with strong expertise in job creation policy, workforce development analysis, and socio-economic growth and development. He can be reached at [email protected]

‘Mahama Is Visionary, A Leader You Can Trust’ – Naana Jane
7 minutes ago