Re: Minister, Ambrose P. Dery Accused Of Neglecting His Constituents 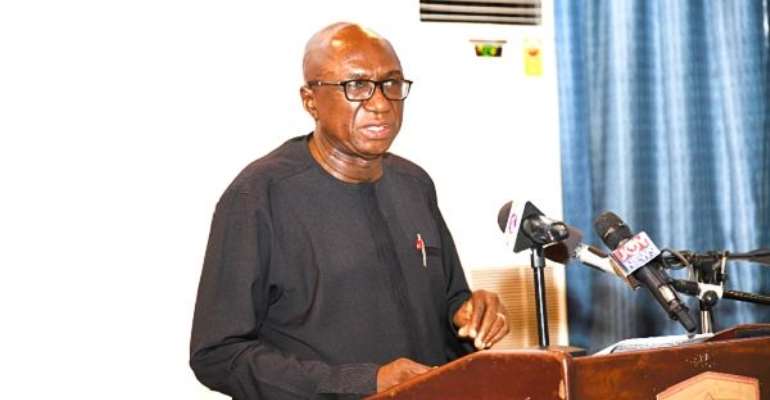 I sighted a piece of write up on a WhatsApp and other social media platforms by one Cornelius Naasoa Wuobar who is also the NDC Constituency Secretary for Nandom claiming that the Member of Parliament for Nandom, Hon. Ambrose Dery has neglected the people of Nandom in the wake of the meningitis epidemic.

My view on this so-called write -up by the NDC general scribe for Nandom is that it is a figment of his own imagination that cannot go through any litmus test in any social engagement and/or activity. This should be treated with the utmost contempt, deservedly.

To set the records straight on this Machiavellian write up which only sought to yield some cheap political capital in the wake of the tremendous performance of the hard working Member of Parliament for Nandom (Ambrose Dery). I would wish to state in unequivocal terms that the Member of Parliament who is also the Minister for the Interior, Hon.Ambrose Dery has not only played a key role in the fight against the COVID 19 and CSM in the Nandom Municipality recently, but has always been responsive on matters concerning health and other related issues. The revered Law Maker, in 2017, procured a machine for the treatment of Cervical Cancer for the St. Theresa's Hospital. He also personally funded the screening of Cervical Cancer for all Women in Nandom as well as other related illnesses.

In zeroing in on the issues on CSM as the writer wishes to highlight, the Honourable Member of Parliement, made a cash donation of Gh₵2,000.00 to the Directorate of the Ghana Health in the Nandom Municpality to enable them conduct public education in February, 2020 on the CSM epidemic. In addition to the initial cash donation to the Health Directorate in the wake of the COVID- 19 and CSM, the Hon. Ambrose Dery also directed the Municipal Chief Executive Hon. Thaddeus Arkum Aasoglenang, to release some money from his share of the MPs Common Fund to the Municipal Health Directorate, to be used to purchase fuel, to enable the Health Directorate to conduct community engagements to sensitize the public on the outbreak of the disease and also supervise burials.

The Municipal Health Director, acknowledged receipt of the amount to the MCE when he visited her office. She even gave a letter of receipt and appreciation to that effect. As a matter of fact, the Honourable Ambrose Dery has been of immense support to the Health Directorate, and the St. Theresa's Hospital and other Health facilities in the Municipality, but prefers his support to these institutions, rather be on a low key.

The Honorable Ambrose Dery who has won the admiration of many as a result of his dedication to the service and welfare of the people of Nandom both at home and in the diaspora, spoke to all Nandome live on the 31st of March, 2020 through RADIO FREED, a community based radio, during which he called on all Nandome to take the necessary precautionary measures and also adhere to the directives on CSM and COVID-19 pandemic seriously.

In his quest to unleash his propaganda stricken write up, the secretary of the NDC for Nandom who recently lost his second term bid as an Assembly Member also lost site of the fact that the St. Theresa's Hospital at Nandom, is a major referral Hospital for some Districts Bordering with Nandom and until recently, Burkina Faso as well. Therefore, with regards to the CSM cases, Nandom might have recorded the second highest number of deaths (10 as of now) in the region. However, it is imperative to note that most of the cases were referrals from other nearby Districts. According to the Municipal Director of Health, most of the cases came from Lambusie and Fielmuo which are in different Districts as mentioned earlier and since the St. Theresa's Hospital serves as a major referral hospital to these districts, the cases are recorded there.

That notwithstanding, the MP has not absolved himself of any responsibility.

Cornelius should learn to visit the institutions and solicit for firsthand information and stop making noise with social media information. No wonder he is a social media politician. Being a social media politician, I am not surprised he is not aware of the latest updates on the CSM epidemic in the region. I hereby want him to be informed that the Government of Ghana and the W.H.O have made available medicine through the region to the municipalities and districts.

I wish to also point out that the Hon. Ambrose Dery personally procured the PPEs which were donated to the various health centres and other allied institutions in the constituency to help in the fight against COVID-19. None of those items was customized or branded with Ambrose's picture nor party colours because he did it in the interest of the welfare of the people of Nandom and not for political gains. I am challenging Cornelius to triangulate this fact at the Tuopare CHPS Compound which is located in his community.

Interestingly, Cornelius indicated that Hon. Bagbin, who is not contesting elections in December, has procured vaccines (thus if there is any at all) for his people. If that is true, I commend Hon. Bagbin for that. That is what every leader and stakeholder should do. If I may ask and respectfully so, is the NDC PC not a stakeholder as far as Nandom is concerned? What has Mr. Richard Kuu-ire done in the wake of these debilitating diseases in his municipality?

What prevents him from also organizing the CSM vaccines for Nandome if he has good intentions for the people of Nandom. Must he become MP before he can help in times of crisis like this? Good people of Nandom, it is obvious that the NDC Parliamentary Candidate has nothing to offer us else, he should demonstrate to us what he can do.

He should learn from Hon. Ambrose Dery who has been doing a lot for Nandome even before he became MP recently. He demonstrated clearly to the good people of Nandom his capabilities and intentions for the Constituency that was why he was given the nod and so far has not disappointed his people. Cornelius and his political cabal are benefiting from the good works of the MP today but pride will not allow them to admit it.

To straighten the records with regard to the boreholes, the Member of Parliament's boreholes are distinct from that of the boreholes drilled through the World Bank in 2018. The World Bank drilled 51 boreholes while the MP sunk 55. The MP single handedly funded all 55 boreholes. Cornelius can go and verify from the Nandom Municipal Assembly. This was done out of the benevolence and the desire of the MP to see his Constituents enjoy potable water which will gradually translate into good health and well-being. It is strange to note that, the writer without verification is claiming that the contract for the Boreholes Drilled in Partnership with the World Bank was signed during the previous administration.

This I must say is an act of desperation by losers such as Cornelius Wuobar. The Government of Ghana under the leadership of Nana Addo Dankwa Akufo-Addo, paid the counterpart funding for the 51 Boreholes in 2018. Not only did the Municipal Chief Executive for Nandom Honourable Thaddeus Arkum Aasoglenang, preside over the tendering process, but also signed the contracts for other Districts in the Upper West Region. The desperate attempt to claim an undue credit in this regard is therefore not only out of sync but also out of place.

It is understandable when the NDC tries to paint a certain picture with lies and fabrications in order to gain the support of the masses; the NDC thinks it is impossible for one man to Drill 55 boreholes and more. If 'generosity' does not exist in the dictionary of the NDC, it does exist in the dictionary of the NPP. Cornelius and his people, take note.Hon. Ambrose Dery is not the man who takes credit for works he has not done, unlike Mr.

The Constituency Secretary of the NDC also alleged that a National Security Survey revealed that the Hon. Ambrose Dery will lose the elections to Mr. Kuuire. This is laughable to say the least. I am sure he meant a National Democratic Congress survey. It must have been a typographical error maybe. If not, then it is wishful thinking which will only remain true in the camp of the NDC. Nobody will trade stones for pebbles.

The performance of the Member of Parliament for Nandom, anchored on His Excellency Nana Addo Dankwa Akufu Addo is par excellence. It is amazing when you begin to list the achievement of Ambrose Dery in the Nandom Constituency. There is no gainsaying that “if you cannot beat them, join them”

I will, therefore, call on all Nandome to ignore the NDC constituency secretary who has defied the call of Mr. Richard Kuu-ire, the PC of the NDC, to refrain from politicking with the CSM hazard and the COVID 19 pandemic by spewing untruths. Cornelius, your PC cannot reward you for defying his orders and worse of it all displaying ignorance.

In conclusion, it is public knowledge that Hon. Ambrose is always there for the people of Nandom which all of us are aware of and the level at which he is developing Nandom and its environs should tell you that he really cares for his people.

Your dictatorial, political bloodshed will be responded, we ...
17 minutes ago