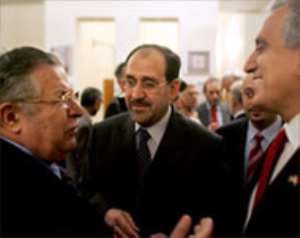 Iraq's parliament has approved the country's new government during a session in Baghdad.

In a show of hands, the 275 members of parliament approved the list of cabinet ministers read out by Nouri al-Maliki, the prime minister-designate.

The new ministers then took their oaths in the session, held inside the city's heavily fortified Green Zone and broadcast on Aljazeera Live.

"We will work within a framework that will preserve the unity of the Iraqi people," al-Maliki said.

Al-Maliki listed 34 policy priorities for the government, with a heavy emphasis on security and the economy.

He also stressed that the government would work to set an "objective timetable" for transferring security responsibilities from US-led troops to Iraqi forces.

At a press conference before the session, Khalid al-Attiyah, the deputy parliament speaker, said: "This is a historic day for Iraq and all its people."

Al-Maliki said that he would run the country's interior ministry and Salam al-Zaubai, the deputy prime minister-designate, would be temporary defence minister, after tensions between Iraq's factions over the posts threatened to delay the parliament session further.

Several members of the Arab Accordance Front, the country's main Sunni political bloc, walked out upon hearing that permanent security ministers would not be selected at the session.

The session comes hours after a bomb blasts in Baghdad and the western Iraqi town of Qaim left 20 dead.

The bodies of 15 people were also found, some showing signs of torture, in the town of Musayib, south of Baghdad, a defence ministry source said.