Ebola: Profile of a killer 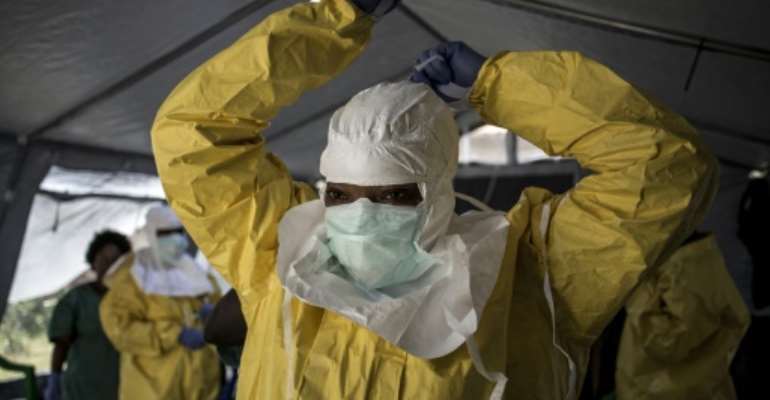 A 20-month campaign to stamp out an epidemic of Ebola in eastern Democratic Republic of Congo (DRC) may be declared over on Monday if no further cases of the disease are reported.

Here is a factfile:

Ebola haemorrhagic fever was first identified in 1976 after Belgian-led scientists probed a string of unexplained deaths in northern DRC, then known as Zaire.

The disease was named after a river nearby.

Bushmeat -- wild animals that are killed and butchered for their meat -- is considered a potential source of Ebola. By FLORENT VERGNES (AFP)

The virus that causes Ebola is believed to reside in bats, which do not themselves fall ill but can pass it on.

Chimpanzees, gorillas, monkeys, forest antelope and porcupines can become infected, and humans who kill and eat these animals can catch the virus through them. Infected humans, in turn, contaminate other people through contact with their body fluids.

The average fatality rate is around 50 percent but this can rise to 90 percent for some epidemics, the World Health Organization (WHO) says.

A lethal foe: The Ebola virus. By (AFP)

Ebola is difficult to contain, especially in urban environments.

Patients and people who have been in contact with them are routinely isolated.

The worst Ebola epidemic started in December 2013 in southern Guinea and spread to the neighbouring West African countries of Liberia and Sierra Leone.

Health workers carry a coffin containing a victim of Ebola in Butembo, a city at the heart of the latest outbreak of the disease. By JOHN WESSELS (AFP)

It claimed the lives of more than 11,300 people from the nearly 29,000 registered cases, according to WHO. It declared the epidemic over in March 2016.

More than 99 percent of victims were in Liberia, Guinea and Sierra Leone.

Search for a vaccine

After the latest DRC outbreak, health authorities there began issuing the experimental rVSV-Zebov vaccine on a large scale for the first time.

Developed by the US pharma group Merck, the vaccine, "prequalified" by the WHO in November 2019 for approval, was introduced after earlier trials found it safe and effective.

Two experimental vaccines were brought in to fight the latest Ebola epidemic after being given trials to check they were safe. By Junior D. KANNAH (AFP)

A second experimental vaccine was introduced in October 2019, produced by a Belgian subsidiary of Johnson & Johnson and has been administered to more than 20,000 people as a precaution in areas of DRC from where the virus is absent.

The latest epidemic was declared on August 1, 2018 in eastern DRC's North Kivu province, on the border with Uganda, and spread to neighbouring Ituri and South Kivu.

The WHO in July 2019 declared the outbreak a "public health emergency of international concern," a rare designation only used for the gravest epidemics.

It became the tenth outbreak in the country, and the second worst in Africa. In the runup to Monday's hoped-for announcement, 2,273 people have died, according to the latest WHO toll, published on Twitter.