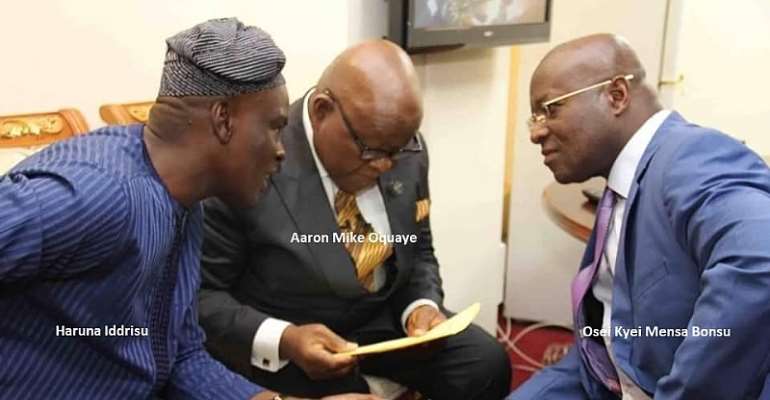 Minority Leader, Haruna Iddrisu is unhappy that the Speaker of Parliament, Prof. Aaron Mike Oquaye suspended the House last Saturday instead of adjourning sittings in accordance with laid down procedures in the House.

The Minority Leader had also accused the Speaker of Parliament of disrespecting him.

Majority Leader, Osei Kyei Mensah Bonsu had shot down the claims and accused the Mr. Iddrisu of refusing to attend leadership meetings.

In his latest outburst, Haruna Iddrisu accused the Majority Leader of “misleading” the Speaker of Parliament.

Despite the claim, Mr. Iddrisu in an interview on the Citi Breakfast Show on Tuesday insisted that he has no qualms with the Speaker of Parliament.

With regards to Minority’s issues on the suspension of Parliament, Haruna Iddrisu told host of the Citi Breakfast Show, Bernard Avle that he had sent Osei Kyei Mensah Bonsu a text urging him to ensure that the House is adjourned but his advice was disregarded.

“On Saturday, I sent him a text that let’s just announce adjournment sine die with a notice for a recall and he can’t deny it. So where from this that there is no communication or cooperation? On the day, I walked to him and told the Leader that, I hope that we will build a consensus that we will adjourn sine die with you giving a strong indication of a recall. So he [Majority Leader] is the one misleading the Speaker,” Mr. Iddrisu insisted.

Meanwhile, the Majority Leader who was also interviewed by Bernard Avle was unhappy Mr. Iddrisu described him as someone who has been misleading the Speaker and “lacks candour.”

“I’m scandalised by the words used by the Minority Leader against me. Anyone would testify that there has never been a healthier relationship between the leaders of both sides of Parliament than there is now,” he said.