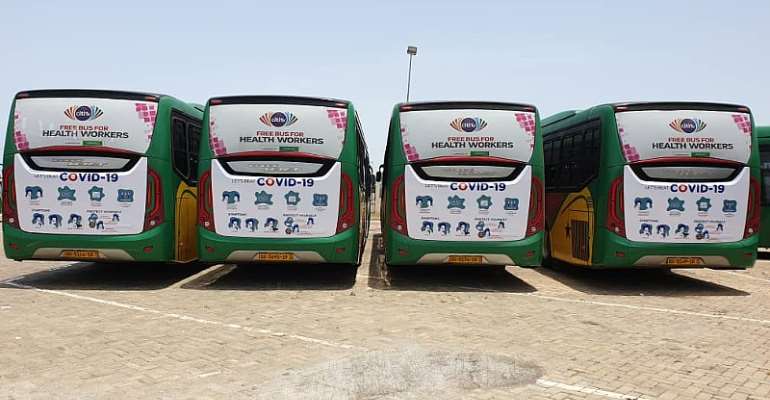 Citi TV has cancelled the planned free bus service for health workers in the Greater Accra Region at last hour scheduled to commence on Monday, April 6, 2020.

The management of the station decided to cancel the initiative after the operators of the Ayalolo Bus Service – The Greater Accra Passenger Transport Executive (GAPTE) communicated to the station via an email at 4 pm on Sunday to indicate that the buses, would no longer be available for planned service, following a government directive to the company to deploy all their buses within the lockdown area.

The communication to withdraw the service came several hours after Citi TV staff, branded the Aayalolo buses under the supervision of the GAPTE officials.

The station announced on Friday, April 3, 2020, its intention to convey health workers in the Accra Region to and from work, following complaints by health workers, that the implementation of the lockdown had left many of them stranded in their bid to get to work.

Management of the station decided to rent four (4) Quality Bus System (QBS) buses popularly known as Aayalolo buses to be deployed on four main routes to pick up health workers for free, from Amasaman, Kasoa, Sakumono and Ayi Mensah. The station duly made payment for the service and went ahead to band the buses ahead of their deployment on Monday morning,

The station was forced to pull the plugs on the much-publicized initiative following the communication from the Depot Manager of GAPTE, Mr. Charles Annan, indicating government’s directive and the subsequent unavailability of the buses for Citi TV’s use. Find below a copy of the communication is reproduced below:

Last week The Greater Accra Passenger Transport Executive (GAPTE) temporarily grounded its Aayalolo buses due to losses it had been incurring following the social distancing protocols announced by the President and subsequent partial lockdown of Accra.

According to the management of the company, the bus currently takes 25 passengers instead of 89 in line with the new public gathering advisories.

A visit to the Kinbu bus terminal in Accra showed an empty terminal with only security personnel and few buses on site.

Public Relations Officer of GAPTE, Fred Tsidi, had told Citi News that his outfit was currently awaiting a response from the Transport Ministry to decide on the next line of action.

This problem compounded the challenges of the health workers, many of who complained to the station of being stranded during the lockdown period, a situation which motivated the TV station to step in.

This new development, therefore, forced the station to cancel its planned service.

The station apologizes to the health workers and the general public for the inconvenience caused and wishes to commend all frontline staff for their sacrifice and commitment to a national cause.

Latest Photo Reports
Catch up with all the political quotes from our politicians.
Advertise here
More Headlines
ModernGhana Links
MMDCEs position useless — Kwame Asiedu Walker
ASEPA drags Shatta Wale to Police CID for faking gun attack
Police arrests Jesus Ahoufe over prophecy of Shatta Wale 'gun attack'
No government has mortgaged the future of the youth than NPP – Mahama
Ameen Sangari Factory will be revived Under 1D1F — Akufo-Addo
Military interventions in two of our member countries ‘backwardness’ – Bagbin to ECOWAS Parliament
I'm sorry, was running away from a prophecy that I'll be shot dead on October 18 – Shatta Wale
Police comb for Shatta Wale after reportedly shot
We Will Not Allow Anyone To Cheat Us In 2024 Elections — Mahama
TOP STORIES