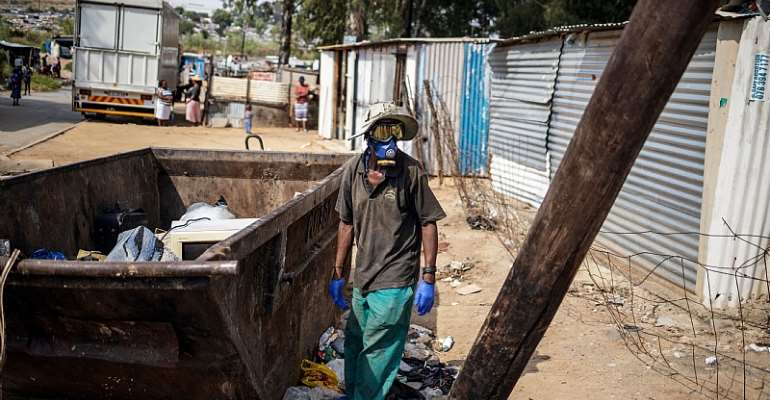 The lockdown has shown how deep the spatial, economic and social inequalities are - Source: Getty Images

As South Africa entered its 21-day lockdown , the political message was that South Africans were all in it together. However, it is clear that while society has been united politically to fight COVID-19, there are extreme and persistent economic and social inequalities. The lockdown confines everyone to their home for three weeks. But what does this mean in a country riven with inequalities?

The lockdown has illuminated how the spatial, economic and social inequalities which were characteristic features of the apartheid period have persisted in post-apartheid South Africa. Media coverage has shown inequalities in access to transport, shops, COVID-19 testing, and the very different ways the lockdown has been enforced and policed in different communities.

Here, we focus on the economic inequalities which have been highlighted by the lockdown. A time of crisis, such as this, shows the economy for what it really is. It strips it of all the trappings that often obscure the true economic relations. Events like this allow us to see how different parts of a society are structured to deal with distress, disruptions and economic shocks.

In South Africa, it's a stark picture.

Economic data can help us construct a picture of the financial inequalities across South African households. If we divide households in the country into five groups (quintiles), from the poorest 20% to the richest 20%, we see how deep inequality is in the country. According to forthcoming research by our colleague Gabriel Espi at the Southern Centre for Inequality Studies , drawing from the National Income Dynamics Study from 2017 , approximately 18 million South Africans live in the poorest 20% of households. Almost half of these poorest households are in rural areas. (While there are some doubts about the reliability of population counts generated by the National Income Dynamics Study, and whether the data underestimate poverty, the household-level insights it provides are very useful.)

On average, these poorest households have about five members and a total monthly household income of R2,600 (or about R567 per person in the household). Only 45% of households have an employed member. Much of this income would have been lost as the shutdown began. Indeed, a recent study by the Southern Africa Labour and Development Research Unit, which specialises in research on poverty and inequality, labour markets, human capital and social policy, found that the poorest 10% of households will most likely lose 45% of their income through the shutdown.

Many of the people in the richest households are able to continue to earn an income by working from home, and many will actually save money due to reduced expenditure on things like eating out, holidays and entertaining.

For others, in lower-paid formal employment, the lockdown has exposed many to the risk that they could lose their jobs. For this group, the Unemployment Insurance Fund provides some temporary relief.

One particular group – informal workers – has no protection whatsoever, and the lockdown effectively removes their ability to earn any income at all.

Analysis of the Labour Force Survey data shows that there are 2.6 million South Africans working in the informal sector as own-account workers or their employees. Approximately a million more people are employed as domestic workers, many of whom do not have employment contracts or any unemployment benefits.

Many of these people would effectively have lost their jobs and their ability to earn an income at midnight on Thursday 26 March. When the lockdown ends, many of these workers, especially women, who often occupy the most precarious positions in the labour market, will find it very difficult to re-establish their work on the street corners, taxi ranks and train stations around the country. These workers, sometimes called “the precariat”, have work, but no protection whatsoever.

During events like a lockdown, or a protracted economic crisis, it is not income, but wealth, which sustains households. Here, the inequalities are unfortunately even more striking.

While these individuals would have lost a portion of their wealth in the recent stock market crash, they are still substantially better off than most, and their household far better equiped to endure the lockdown.

In terms of access to essential supplies, there is also a chasm between rich and poor. As we saw from the long queues in the shopping centres prior to the lockdown, those in the top quintile had sufficient income to go on a buying spree and stock up in anticipation of the lockdown. On the other hand, in the bottom quintile, millions of people had to queue in the supermarkets after the lockdown was in operation, jeopardising their health.

A recent study by the Institute for Land and Agrarian Studies finds that households with different incomes have very different access to food. The poor are at a significant disadvantage during the lockdown, with potentially catastrophic results for nutrition and hunger.

It is clear from these figures that while all households are locked down together, their abilities to manage the situation vary substantially. The resources to survive a three-week lockdown vary hugely between households. For the rich, this period may well mean an increase in savings. But for the poor, it means financial ruin. Most of the low wealth households will be plunged further into debt, as they are forced to liquidate their assets to survive the lockdown. The financial and economic consequences of the lockdown will be nothing short of catastrophic for many – if not most – South Africans.

What's to be done?

The bold, decisive and evidence-based action by the government in response to the public health crisis the country faces should be applauded. The health response has, so far, been good. There has been rapid action to address some of the economic fallout of the crisis, including extraordinary tax relief , and bringing forward the payment of social grants .

But the current crisis is really worsening enormous existing inequalities, in addition to creating new ones.

Far more needs to be done to counter the economic destruction currently under way. South Africa cannot tackle the problem with marginal economic policy interventions. It needs immediate and drastic action informed by the best available economic evidence which is being offered by researchers across the country . South African society is at risk if it does not address these economic inequalities.

Indeed, the COVID-19 pandemic makes it clear how interrelated the society really is. The country can't successfully flatten the curve of infection unless all have the ability to stay at home. For many the choice between staying at home and starving, or going out in search of work, is fast approaching.

For many others, spatial apartheid and extremely high levels of poverty make it virtually impossible to conform to the social distancing required to contain the spread of the coronavirus.

South Africa will not be able to tackle the COVID-19 crisis in a unified way if it does not mitigate the worst of its inequalities, and time is running out.

Imraan Valodia receives funding from a number of science councils in South Africa and from international philanthropy organizations. In developing the ideas for this article, I have benefited enormously from discussions in the Covid-19 Economists Group and in the Presidential Economic Advisory Council.

David Francis works at the Southern Centre for Inequality Studies which receives funding from the Ford Foundation, the Open Society Foundation, the International Development Research Centre, the Friedrich Ebert Stiftung and the World Health Organisation. He is a member of the COVD-19 Economists Group.

By Imraan Valodia, Dean of the Faculty of Commerce, Law and Management, and Head of the Southern Centre for Inequality Studies, University of the Witwatersrand And

David Francis, Deputy Director at the Southern Centre for Inequality Studies, University of the Witwatersrand