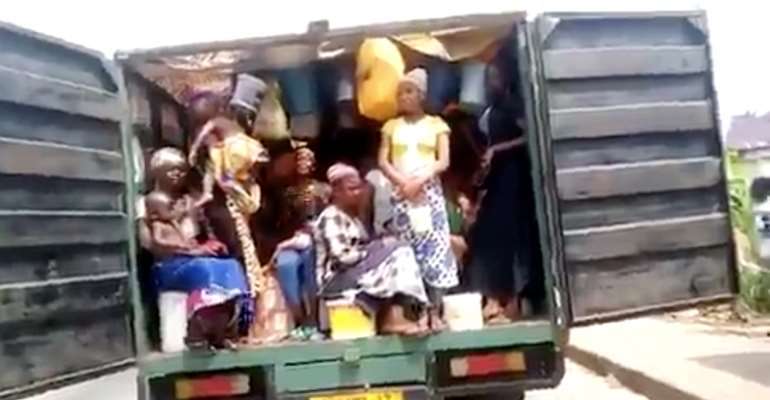 I cringed, when I read, watched and got tagged in people's post on social media about a group of young ladies travelling from Kumasi in a cargo car to Walewale in the North East Region. And how the said cargo vehicle was impounded by the MCE for the Ejisu Municipality with the help of the security in that area, maybe through Intel.

Later, when the news went viral on mainstream and social media, the MP for Walewale and deputy minister for Agric with his usual delay defeats equity approach to issues got wind of the matter and headed to meet these people (76 Kayaayes) without any idea of helping them out. And had to state publicly to the media that he needs to make contacts with the MP for Yagaba/Kubori Hon Ibrahim Abdul-Rauf Tanko and the MCE and DCE for West Mamprusi and Mamprugu- Moaduri respectively before. This to me proved that our MP and other government appointees in position of information and power never had a thought of our brothers and sisters down south run through their minds when the president announced the partial lockdown of the country.

Surprisingly! But very usual of us, Dr Bawumia remembered us and gifts each a five hundred Ghana cedis for the cameras to capture. Good gesture gone bad! If proper thoughts about the 'Kayaayes' was done Dr Bawumia needed not to gift anyone a five hundred Ghana cedis. If the Vice president, minister for local government, the deputy minister for Agric, NSS Director and the minister for North East Region, haven't been very close to power had planned and thought of their siblings in Accra and Kumasi, Walewale always being in the news for the wrong reasons or better still the North East Region could have been saved this time around.

But they looked on and their boss came announcing a lockdown of Accra and Kumasi, and unfortunately, these people have turned around to clear the debris of the fire they have helped in preparing. How sad!

The head potters (Kayaayes) could have better been taken care off in a bipartisan way. If the government through the Veep had called on all Northern caucus, more especially when we have the Minority Leader a northerner, and the Deputy Majority chief whip another northerner, and before the President's announcement, they could have fine a befitting measure to address the issue of their northern folks. Either find accommodation for them, for the period of the lockdown or screen them medically and transport them with dignity home before the period of the lockdown starts. But to come after the dehumanizing treatment had been meted out to your folks, to help them for the cameras to capture to me an afterthought and deserves no applause.