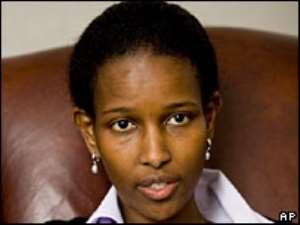 Controversial Somali-born Dutch MP Ayaan Hirsi Ali has said she will resign after admitting she lied on her asylum application.
Ms Hirsi Ali said she would quit after the country's immigration minister withdrew her Dutch citizenship.

A fierce critic of conservative Islam, Ms Hirsi Ali rose to prominence in 2004 after her film-maker colleague Theo van Gogh was killed by a Muslim extremist.

She has since had police protection, amid threats from Islamic extremists.

Ms Hirsi Ali announced her decision at a news conference in The Hague.

In the documentary, Ms Hirsi Ali said that when she arrived in the Netherlands she had come straight from Somalia, whereas actually she had lived in three different countries in the interim.

The MP came under fresh pressure last month after a Dutch court ruled that she must leave her home in The Hague because neighbours felt she was a security risk.

Dutch Immigration Minister Rita Verdonk said on Monday that in the light of the programme and other facts, the MP's citizenship was unlikely to be valid.

"It is difficult to live with so many threats on your life and such a level of police protection," Hirsi Ali was quoted by the Associated Press news agency as saying.

"It is difficult to work as a parliamentarian if you have nowhere to live. All that is difficult but not impossible. It has become impossible since last [Monday] night."

Dutch media has reported that Ms Hirsi Ali will go to work for the American Enterprise Institute, a conservative think tank, in Washington.