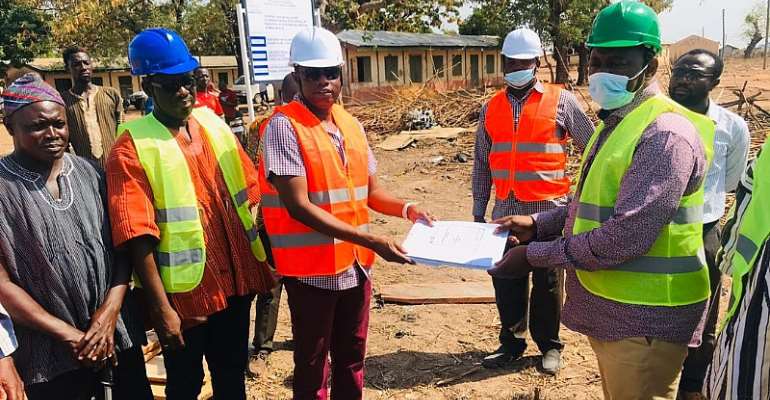 The NDA officials with the contractor at the project site

The Northern Development Authority (NDA) has break ground for the construction of a 6-classroom block at Busunu in the West Gonja Municipality of the Savannah Region.

The 6- classroom block project has additional facilities like a staff common room, stores, a library as well as a 4 unit KVIP and a 2 unit urinal.

The entire project is estimated at GHC720,000 with a completion period of 6 months.

The NDA said it is also rehabilitating the health centre at Bunusu to give a facelift to the community.

The West Gonja Municipality is expected to benefit a total of 8 projects from the NDA under the government's Infrastructure Poverty Eradication Program (IPEP).

Stephen Yir-Eru Engman, NDA's deputy CEO in charge of projects, who cut the sod for the commencement of the project said they are seeking to ensure that deprived communities get basic amenities for their survival.

According to him, the financing of project by the NDA is coming from the $1million per constituency promised by President Akufo-Addo's NPP government.

“This year, we are being given the same amount like in 2019, to undertake projects like education, health, water, roads and rural electrification.”

He urged the contractors of the projects to ensure that they deliver quality works for the community.

Mr. Engman appealed to the contractors to ensure the workers observe the safety protocols as outlined by President Akufo-Addo in the fight against the Covid-19 pandemic.

The West Gonja Municipal Chief Executive, Saeed Muhazu Jibril, thanked NDA for the numerous projects they have initiated in the municipality, saying “we are very lucky that the President sees the need for every district or constituency to benefit from the $1million per constituency.”

He appealed to the contractors to employ the youth in the community to enable them to make living for themselves.