By Sofia CHRISTENSEN with Max MATAVIRE in Port Elizabeth 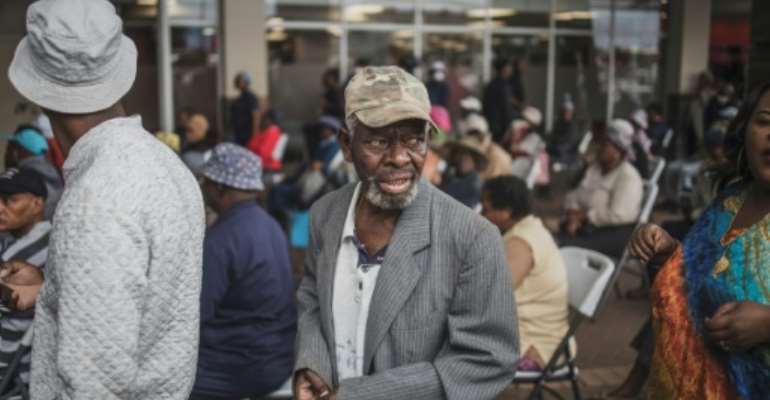 An elderly man from Soweto queues to collect his social grant. By MARCO LONGARI (AFP)

On day four of a coronavirus lockdown, Ntombi Dlamini was ushered past shoppers snaking outside a mall in Johannesburg's Alexandra township, where she had come to withdraw her social grant.

One of over 17 million South Africans who live off social grants from the state, the 60-year-old single grandmother was unable to stock up on groceries before the lockdown began.

Shops were crammed and she was waiting for the grant, which she usually receives on the first day of each month.

With empty cupboards and four grandchildren to feed, Dlamini breathed a sigh of relief when the government brought forward the payment of social grants to the elderly and disabled to pre-empt overcrowding.

"I am very very happy because there was no food," Dlamini told AFP, as she walked out of the shopping centre with much-needed cash in her purse.

"But today we are going to eat," she exclaimed. "Now I can afford to buy food until after this coronavirus is over."

Many like Dlamini have grown concerned about their fate, as thousands of workers and businesses will now also rely on government funding to survive the 21-day shutdown.

"We note the anxiety and fear that this pandemic has caused millions of South African families, especially the most vulnerable," said Social Development Minister Lindiwe Zulu last week.

'We have children to feed'

In the southern city of Port Elizabeth, a major port in the poor Eastern Cape province, slow-moving queues stretched around blocks as people lined up in front of pay points.

"We have been queueing like this over time, why stop us now," said an elderly woman who did not wish to be named, angrily waving her walking stick.

More than 1,200 cases have now been detected in South Africa, with two deaths. By MARCO LONGARI (AFP)

"We don't care about that virus," she grumbled. "We have children and grandchildren to feed."

Further down the line, 87-year-old Nomonde Maphai craned her neck to check on the queue.

"I used my last bag of mealie meal (corn flour) so I have to buy some more today," she said, determined not to return home empty-handed.

The process was more orderly in Johannesburg, South Africa's financial capital, where people were allowed to access pay points before official opening times.

'I am very scared'

At the Pan African Mall in Alexandra, black tape on the ground marked a mandatory distance between customers -- though the space remained shorter than the recommended minimum of 1.5 metres.

But the queue jumps were set up for those collecting social grants.

A South African policeman patrols as he holds a pump rifle in Hillbrow, Johannesburg. By Michele Spatari (AFP/File)

After pocketing their money, the elderly and disabled still had to battle their way through supermarkets and lug themselves home on erratic minibuses.

"You can see my leg, I can't even talk right now because it's so painful," said Christine Mhlongo, 64, wincing as she hobbled past the checkout counter, clutching a bag of frozen chicken feet she bought with her disability grant.

"It is difficult to get to shops and places," echoed 61-year old Grace, who was born with a limp.

"Last week I didn't even come to the shopping centre because there were too many people."

People on social grants are also the most vulnerable to coronavirus, which disproportionately affects the elderly and unwell.

More than 1,200 cases have now been detected in South Africa, with two deaths.

"I am very scared of coronavirus," said Leti Maluleka, 57, who survives off social grants and shares a shack with ten people in Alexandra town.

"I am washing my hands, but what more can we do," she asked.

"We are plenty at the house. If one gets infected, then it is going to infect us all."