By Susan NJANJI with Jurgen Hecker in Paris 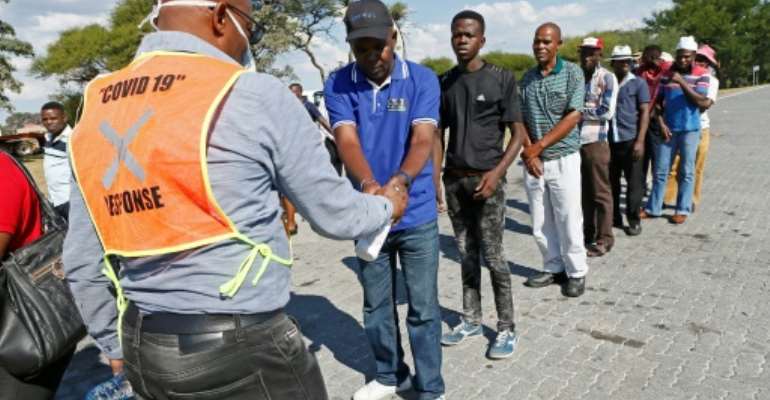 South Africa's economy was already in bad shape before the coronavirus hit. By Phill Magakoe (AFP)

Moody's move "could not have come at a worse time", the South African government said, as it would "further add to the prevailing financial market stress".

The downgrade late on Friday came as South Africa began a three-week nationwide lockdown to try to halt the rapid spread of the novel coronavirus, which has infected more than 1,100 people in the country.

"The key driver behind the rating downgrade to Ba1 is the continuing deterioration in fiscal strength and structurally very weak growth," Moody's said.

"The government's own capacity to limit the economic deterioration in the current shock and more durably is constrained," it said, blaming "unreliable electricity supply, persistent weak business confidence and investment as well as long-standing structural labour market rigidities".

Unreliable power supply has been weighing on GDP. By MARCO LONGARI (AFP)

Losing an investment-grade notation has a real impact on a government's ability to borrow in international debt markets, as many of the world's investment funds are barred by their statutes from investing in junk bonds.

The downgrade "kicks South Africa when it's down", said Daniel Silke, a political economy analyst, on Twitter.

But he said South Africa had been edging towards such a situation since last year "due to politically constrained economic reforms & broader governance failures coupled with rising debt levels".

Annabel Bishop, an analyst with Investec, said additional public spending to support the economy during the coronavirus crisis "will worsen government finances, as will the contraction in GDP and the negative impact to corporate and household incomes on the shutdown".

But the government now had little choice, she said, because "breaking the spread of Covid-19 is paramount, and the costs will be even more substantial" if it holds back.

Two other major international rating agencies, Fitch and S&P, had already cut the credit rating of Africa's most developed economy.

South Africa, which slipped into recession during the final quarter of 2019, has posted its weakest growth rates ever in the past five years -- never exceeding 1.3 percent and in some years falling below one percent.

'Trembling in our boots'

"To say we are not concerned and trembling in our boots about what might be in the coming weeks and months is an understatement," said Finance Minister Tito Mboweni.

'Trembling in our boots'. By RODGER BOSCH (AFP)

The Minerals Council, South Africa's powerful mining industry employer organisation, said it noted the rating cut with "disappointment" if not "surprise", and laid the blame at the door of President Cyril Ramaphosa's government.

Calling the downgrade "largely a result of the government's own making", the council said it was the outcome of "the inability to implement a comprehensive package of economic structural reforms" such as enabling private sector investment in power generation.

South Africa was now in a "fiscal crisis caused by nine years of corruption and state capture", it said.

Meanwhile, economists were beginning to estimate the cost of coronavirus fallout not just to South Africa, but also the rest of the continent.

The impact on its three largest economies -- South Africa, Nigeria and Egypt -- "is expected to shave 1 percentage point off the continent's GDP growth this year, from 3.8% to 2.8%", said Jacques Nel at NKC African Economics.

Preliminary estimates now pointed towards "the weakest growth in Africa since the early-1990s", he said.

Mankarigu Health Center temporarily closed down after attack...
49 minutes ago