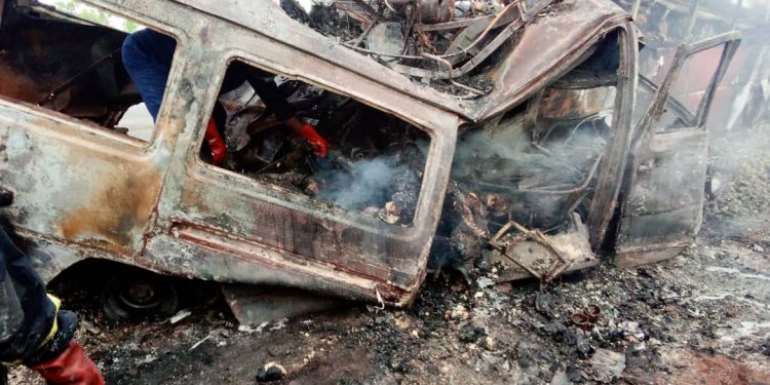 A decision by the Kintampo North Municipal Assembly in the Bono East Region to bury victims of a recent road crash en mass has been suspended as authorities put in place measures to combat COVID-19.

The Assembly took the mass burial decision after 25 out of 27 charred bodies from the crash could not be identified.

Speaking to Citi News, Municipal Chief Executive (MCE) for Kintampo North, Michael Sarkodie Baffoe said a specific date is yet to be set for the burial.

‘We are unable to identify the bodies and so we have taken a decision to give them mass burial. Anytime the families come and they tell us that they are unable to identify them, we cannot go ahead to inter them because of the purposes of evidential accuracy. We have not fixed a date although we have taken a decision for mass burial. We were looking at the issue currently facing all of us which has come up strongly. So in a way it has distorted our plans to bury them in the shortest possible time.”

The Assembly finally reached an agreement with families of persons who died in a recent crash at Kintampo for a mass burial.

It was after 25 out of the 27 charred bodies recovered from the scene of the crash on the Kintampo-Tamale highway were unclaimed .

Family members were given some time to organize themselves and come and identify the remains of their relatives.

The crash involved a high occupancy passenger bus and a Sprinter minibus which collided head-on and caught fire.

31 passengers were confirmed dead as a result of a fatal crash earlier in March that resulted in a fire outbreak at Dawadawa Number 2 on the Kintampo-Tamale Highway.

Some of the passengers were burned beyond recognition as a result of the crash.

There were about six survivors who were sent to nearby health facilities.

The Kintampo Divisional Crime Officer, DSP Kwabena Gbagbo, told Citi News in an interview that the crash involved a bus moving from Bawku towards Techiman and a 23-seater Sprinter.

The crash is the most fatal since the Dompoase crash which claimed 35 lives in January 2020.